It’s been quite some time since we’ve seen the likes of the ever-popular After Hours events at the Walt Disney World theme parks. We saw something similar last year, a truncated After Hours version of Mickey’s Not-So-Scary Halloween Party and Mickey’s Very Merry Christmas Party, but it was NOTHING like the original After Hours events offered to Guests in the past. I’m happy to report that these beloved OG events will return to Magic Kingdom and Hollywood Studios in early 2023.

I had the opportunity to attend an After Hours event at Hollywood Studios in May 2019, about a year before the parks were shut down for the pandemic measures. It was an absolute blast. I know it can be pricey (especially if you have a large family), but stick with me and I’ll talk you through what you get with the price of your ticket, what you can expect, tips for maximizing your time at the event, and if I truly think it’s worth it in the end.

What is an After Hours event?

Disney After Hours is a special ticketed event held on select nights at Magic Kingdom and Hollywood Studios (sometimes they are also offered at Animal Kingdom, too!).  Anyone can purchase tickets for an After Hours event, it is not restricted to only Walt Disney World Resort (on-property) Guests.

For those unfamiliar with Disney After Hours events, they debuted in 2016 as a very limited capacity, separate ticketed event taking place three hours after park closing, with access to select attractions — which automatically meant much shorter wait times (if any at all!) to all of your favorite rides! The event debuted in Magic Kingdom and was eventually offered in Hollywood Studios and Animal Kingdom.

The events often sells out, but with limited tickets sold, you essentially feel like you have the entire park to yourself. Disney After Hours events often also include complimentary popcorn, ice cream treats and beverages.

While I don’t know how many tickets are sold for this event overall (a very limited number of tickets are sold for each event and Disney does not disclose numbers), what I do know is this event is much smaller in scale (crowd-wise) than other special events such as Mickey’s Not-So-Scary Halloween Party or Mickey’s Very Merry Christmas Party. You essentially have the entire park to yourself. It is very VIP-like. I have never experienced anything like it – and I can’t wait to experience it again! 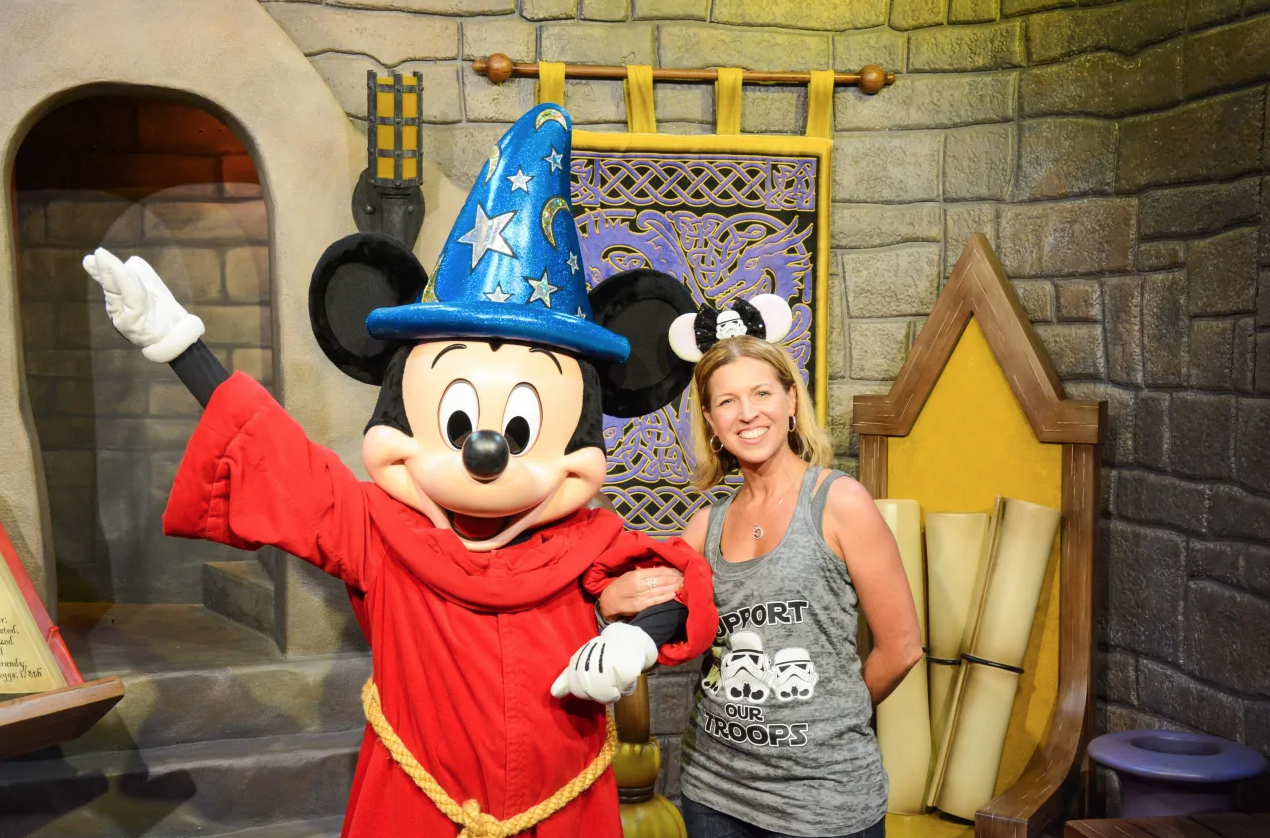 Meet Mickey at Hollywood Studios (with NO wait time!)

So, how much does this event cost and what dates does the event occur? 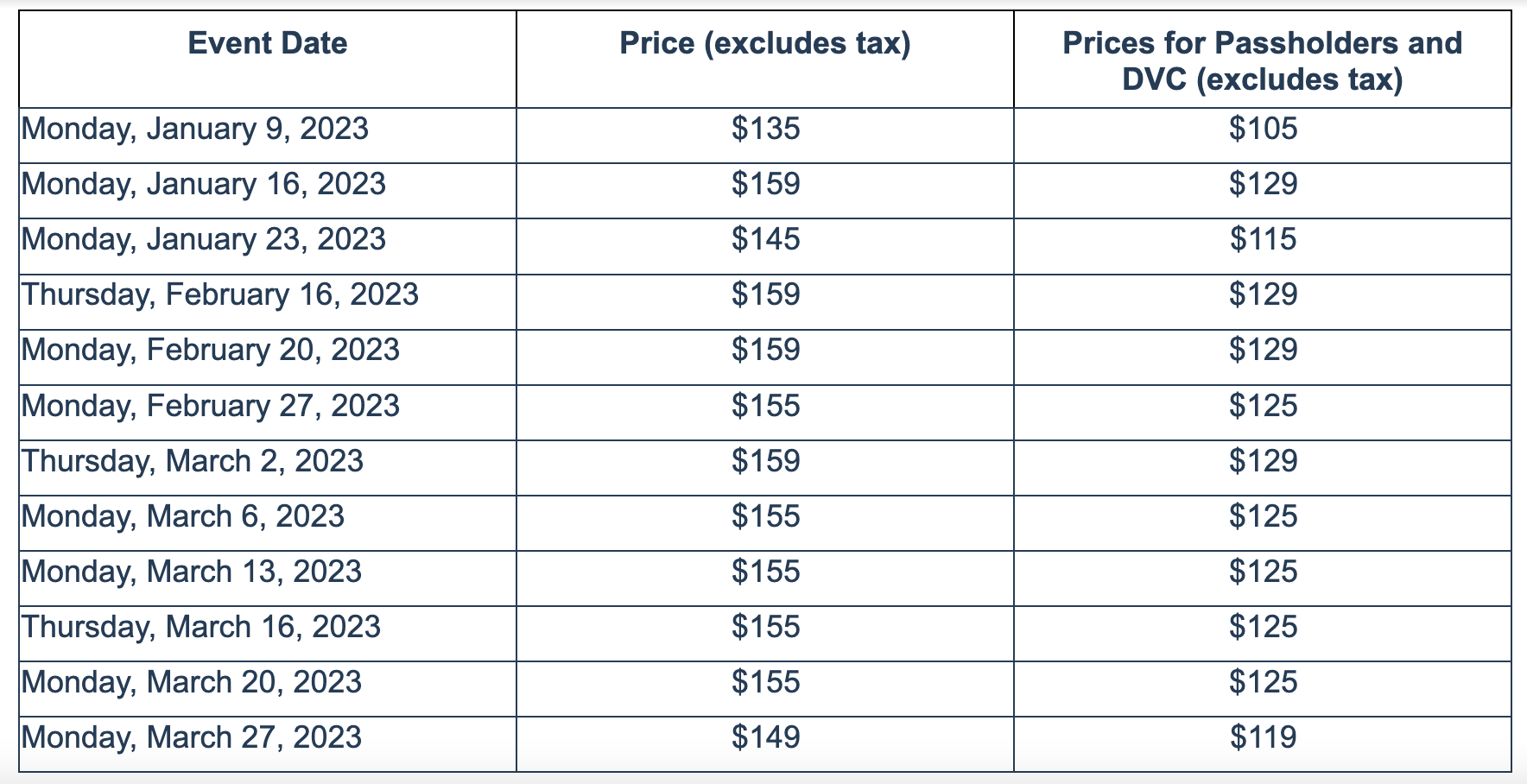 This event takes place from 10:00 PM to 1:00 AM. You can get a head start on the fun by entering the park at 7:00 PM—a few hours before the event officially begins.

Purchase Tickets for After Hours Event

Buy tickets online now. Tickets are limited and may not be available for purchase on the day of the event (or earlier).

TIP: To save on cost, you can choose to spend the day of the After Hours event at Disney Springs or as a pool day at your hotel and attend the Disney After Hours event later in the evening. This way the cost is roughly the same as a full day in the park – and even though it seems you only have 3 hours at the After Hours event, it’s actually plenty of time to get everything done.

So, how much does this event cost and what dates does the event occur? 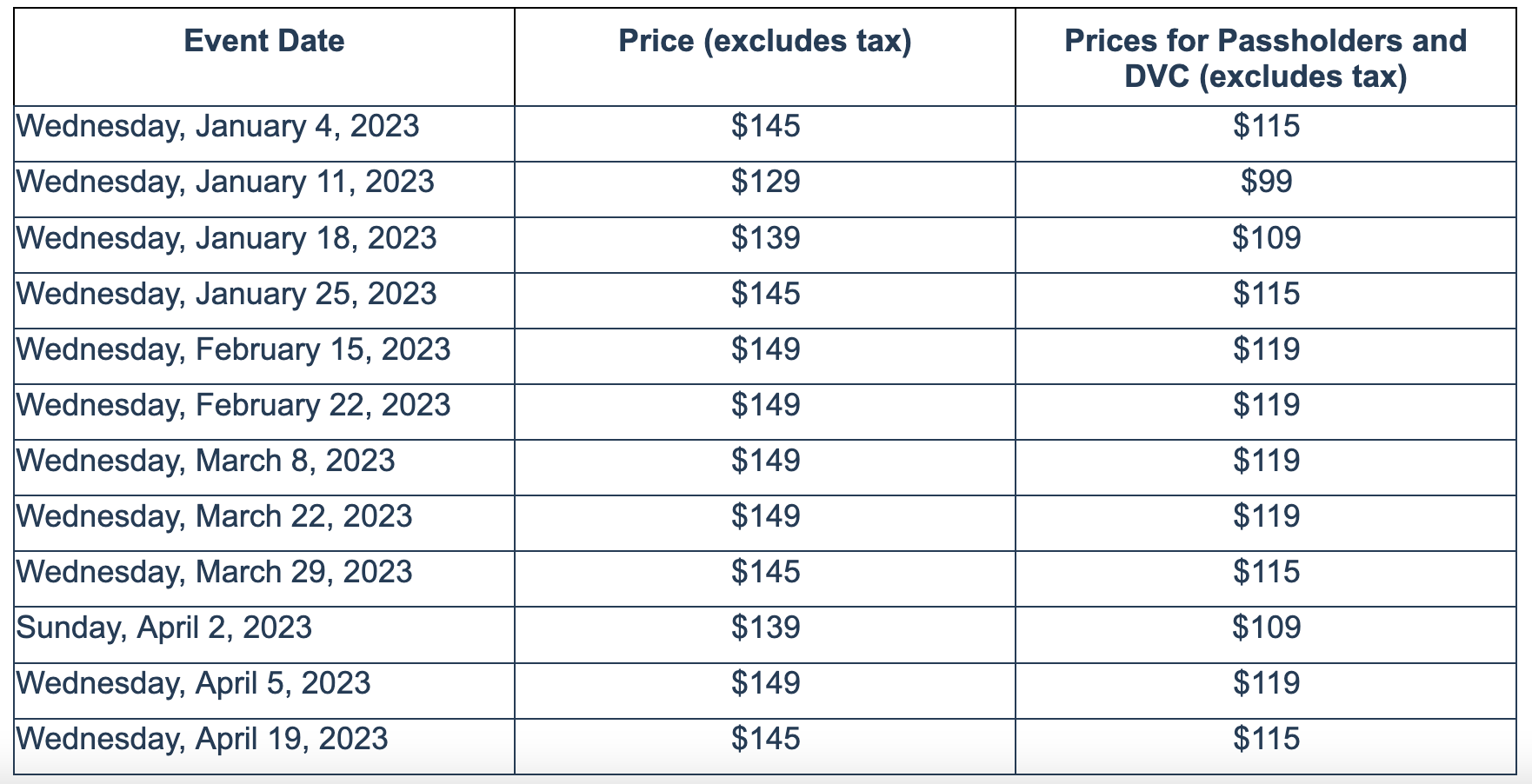 This event takes place from 9:30 PM to 12:30 AM. You can get a head start on the fun by entering the park at 7:00 PM—a couple of hours before the event officially begins.

Purchase Tickets for After Hours

Buy tickets online now. Tickets are limited and may not be available for purchase on the day of the event (or earlier).

How Does the Event Work?

Disney After Hours is offered, well… after hours. So it’s after the park closes that Guests with a purchased ticket can experience all the park has to offer.

The After Hours events are offered different times depending on the time of year, but always after the park closes. No matter what time the event starts, Guests with a ticket for the evening can enter into the park as early as 7:00 PM. So on the night I attended, I had 7:00 PM – 12:30 AM to enjoy Hollywood Studios.

You will receive a wristband upon entering the park so Cast Members know you paid for the event. If you are not wearing a wristband after the event officially starts, be sure to find a Cast Member and obtain one, otherwise you will be escorted out of the park. 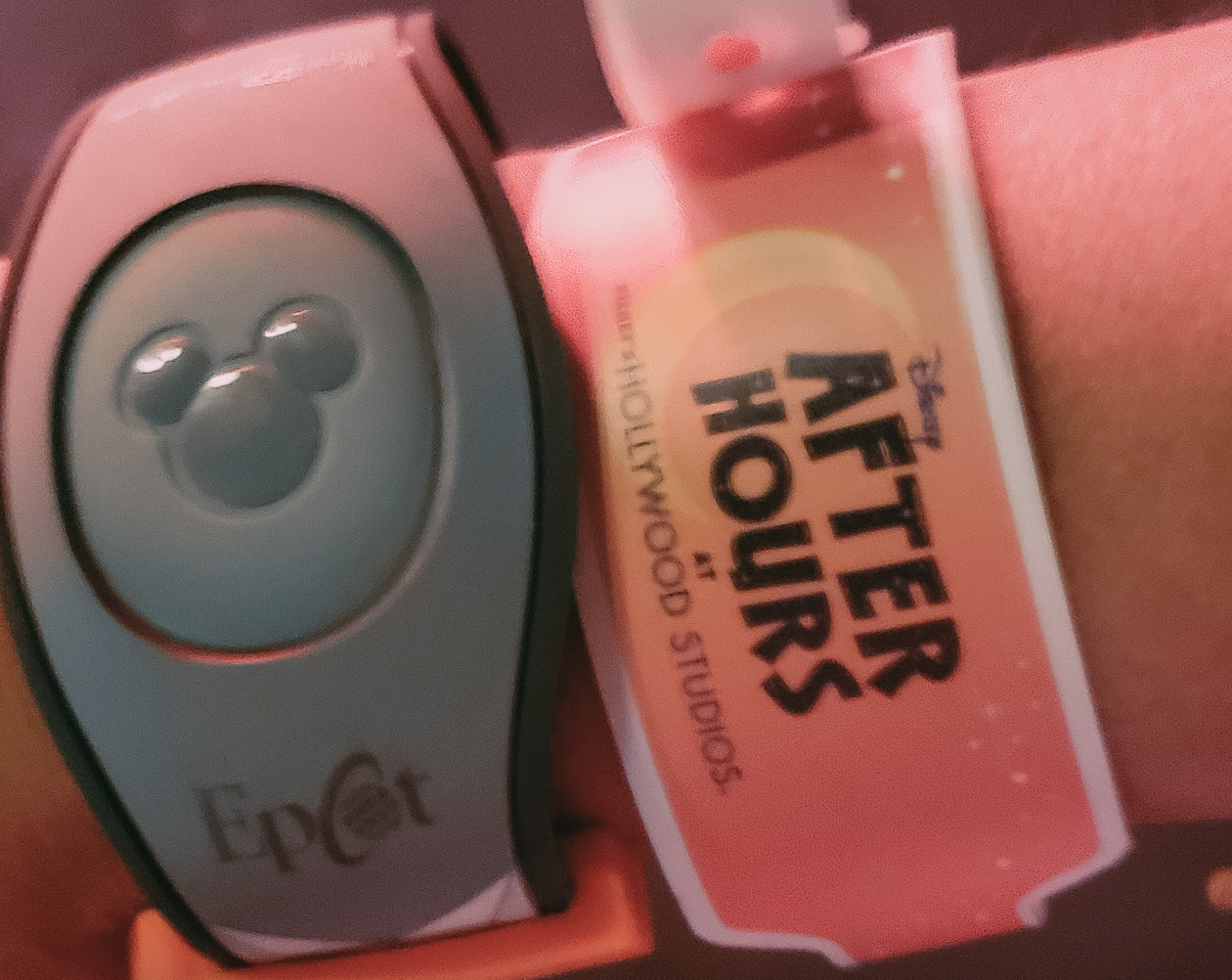 Keep in mind if you enter as early as 7:00PM, the park is still open to all day Guests, so it may be busy and crowded until the park closes and the actual After Hours event begins. However, if you do enter early, you have a few extra hours to take advantage of all the park has to offer .

What Attractions & Character Meets are Available?

Most of the attractions are open at parks during the event. It’s a great time to get on all of your favorites with very minimal wait times – I’m talking a 5 minute wait time! It’s that awesome!

Special characters also make appearances throughout the night, also with very minimal wait times. This is an awesome opportunity to meet Mickey, Minnie or any one of your favorites that you may not otherwise have the chance to because of the long lines during a normal park day. Character greetings are subject to change and may not be the same at each event. Disney typically does not release a list of available character meets, so it will be a bit of a surprise the evening of your planned event. Expect to see some classic and some rare/exclusive characters throughout the night.

So what attractions are available during After Hours?

Enjoy more than 20 attractions—with lower wait times! While subject to change, these may include:

Enjoy some exciting attractions—with lower wait times! While subject to change, attractions may include:

What is Actually Included in the Cost of the Ticket?

Aside from having 3 full hours almost all to yourself in the park, little-to-no waits for all attractions and character greetings, you also receive unlimited snacks and drinks. Mickey bars, popcorn, soda and water are available throughout the parks, so you can pick up whatever you choose as you are headed to the next attraction!

Looking for something a bit different? There will be locations throughout the park that offer other food and drink options for purchase.

Is it Worth the Extra Cost?

YES!! I cannot stress this enough! While I have not yet experienced Disney After Hours at Magic Kingdom or Animal Kingdom, I can surely vouch for Hollywood Studios.

I had a blast – I mean how could I not?! I essentially had the park to myself – with no lines for the attractions and little to no waits for characters. This is almost unheard of these days in the parks. Actually, I almost never take pics with characters anymore because of the wait times. So this was a real treat!

Crowds are growing exponentially at the parks, lines are long and it’s sometimes hard to get through all of the attractions in one day (even with Genie+), so having this opportunity is a huge deal! It saves so much time! As a matter of fact, during my visit I had an entire separate day planned for Hollywood Studios, but since I was able to accomplish everything during the Disney After Hours event, I decided to return to Epcot on my extra day instead.

Disney After Hours runs late, so it may not be for anyone. Those who like to turn in early or have small children that may not make it the whole night might want to really consider if this is worth it for you. You will return to your hotel or home well after midnight.

I’ll recommend this event time and time again! If you have the opportunity or are considering it, just do it! You won’t be sorry! The benefits and fun you’ll get out of the event will outweigh the cost, I promise!