Disney After Hours, is it worth it?

Recently Disney offered a newly ticketed event called Disney After Hours. ?It happens a select number of nights in April and May, with very limited ticket sales. ?Myself along with my great Disney pal Samantha were lucky enough to attend the new event on it’s first night.

We can not even begin to rave enough about the fun we had at Disney After Hours! ?If you desire to have Magic Kingdom all to yourself, with the ability to walk on all of your favorite and most popular attractions, along with endless Mickey ice cream bars, this is the ticket for you!

So, is Disney After Hours worth it? ?

Time: ?The event begins at park close, however you can enter Magic Kingdom as early at 7 pm. ?Magic Kingdom closes to Disney After Hours ticket holders up to 3 hours after park close.

Cost: $149 each, cost for both adults and children over 3

With the purchase of your event ticket you will receive:

*Access into Magic Kingdom at 7 pm to enjoy all of the parks night time entertainment, including Wishes, the Electrical Parade and Celebrate the Magic

*Endless coke products in a bottle, also sold from the ice cream cart.

*Access to literally walk on each and every ride! ?It is amazing!

In other words, just about EVERYTHING!

When we began our evening of Disney After Hours, we thought, lets see if we can ride everything. ?Within 15 minutes or so, it was clear that we could have ridden everything and maybe everything multiple times. ?So rather than just trying to ride it all, we decided to ride our favorites like Seven Dwarfs Mine Train repeatedly. ?Because really, why not! ?As you know, 7 Dwarfs can be darn near impossible to get on without a FastPass or 90 minute wait, so to ride it repeatedly WITHOUT waiting at all!!! made it all that much more fun! ?I can now tell you without a doubt that the best place to ride this attraction is in the VERY back! ?I know this because I rode it everywhere! ?That’s how UNcrowded?it was!

Along with endless walk on access to all of your favorite Magic Kingdom attractions you can have as many Mickey bars and sodas/water as you’d like! ?If you add up the cost of one ice cream and a soda, you’re looking at about $7.25, do that 3 or so times and you’ve easily made up the difference in a regular day’s park ticket cost vs the Disney After Hours cost. ?In my opinion, this is a ticket worth having!

After you’ve enjoyed all of the walk on attractions your heart desires, and all of the Mickey bars your tummy can handle, then you can walk over to Cinderella’s Castle or Main Street and enjoy all of what Main Street has to offer. ?It is truly beautiful and serene and really somewhat peaceful when the park is empty! ?This honestly was my favorite part! ?The attractions are fabulous of course, but enjoying Magic Kingdom all to myself was truly magical. ?I honestly can’t even describe it! ?And then to make it even more magical, Disney magic happened! ?The music came on, the castle lit up and we had our own private little castle projection show! ?Disney Magic at it’s finest!

Starbucks stop, because I am way to old to stay out until 2 am after I’ve worked all day!

Found a spot to watch Celebrate the Magic and Wishes, two shows I could watch over and over again.

Visited Rapunzel and Cinderella. ?We waited a short 10 minutes to see them. 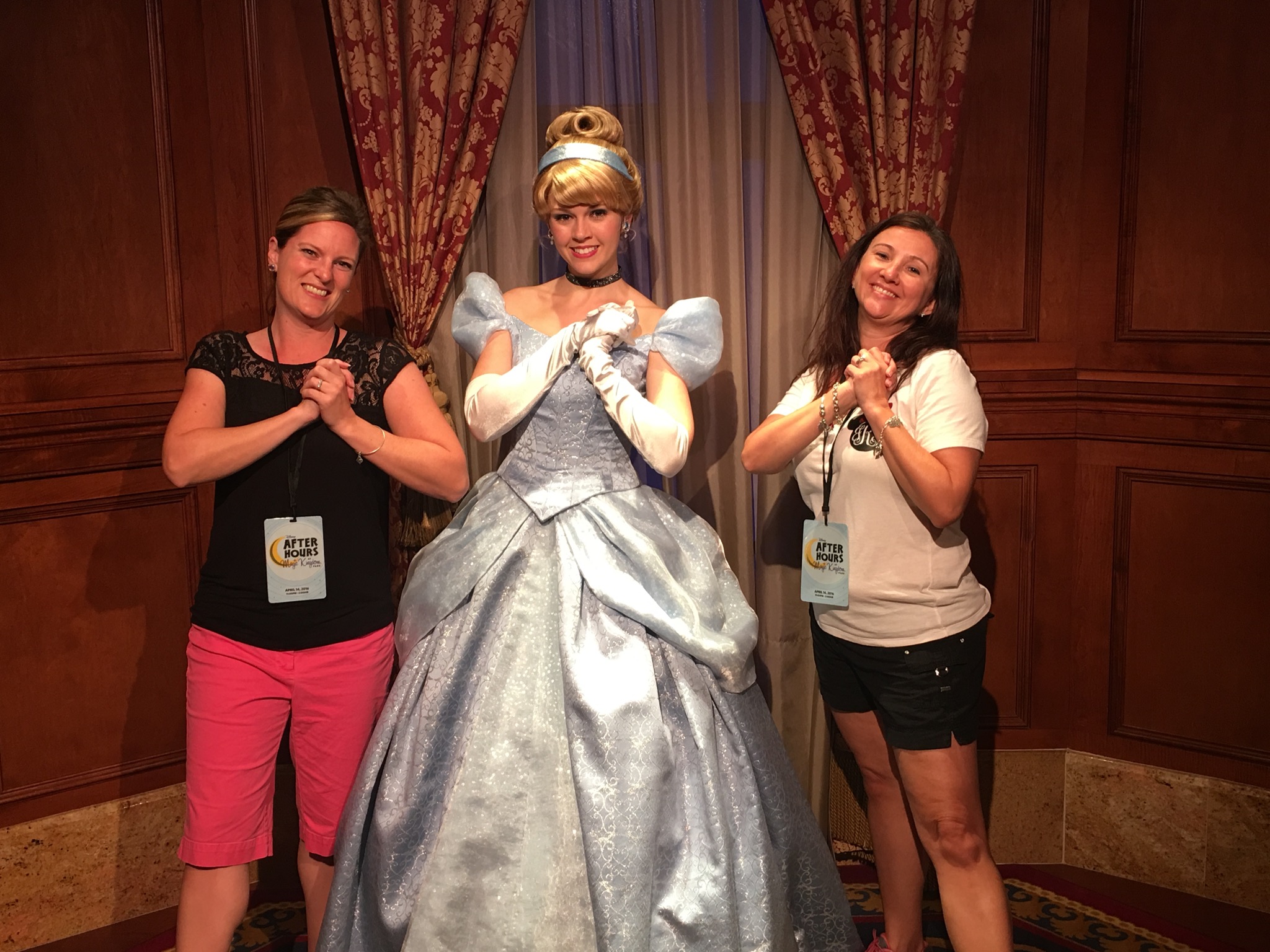 We walked right onto this ride, rode the ride with only one other car filled and then we were asked by the attendant if we would like to just stay on and go again! ?WHAT? ?This does NOT happen at Magic Kingdom! EVER!!!

After Barnstormer, we walked onto Dumbo 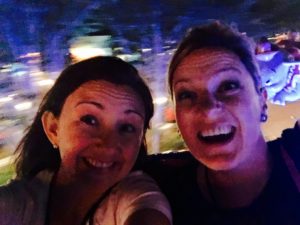 At this point, the park is still open so we decided to meet Ariel. ?(Ariel is not available after hours) No wait to meet Ariel either. ?Pretty much everyone leaves the park after Wishes or the last Electrical Parade, so you are able to do some attractions with a short wait time then. ?At this point, Seven Dwarfs still had a 30 minute wait. ?Short for Seven Dwarfs!

Under the Sea – Journey of the Little Mermaid

all by ourselves…. I mean, seriously, it was EMPTY! 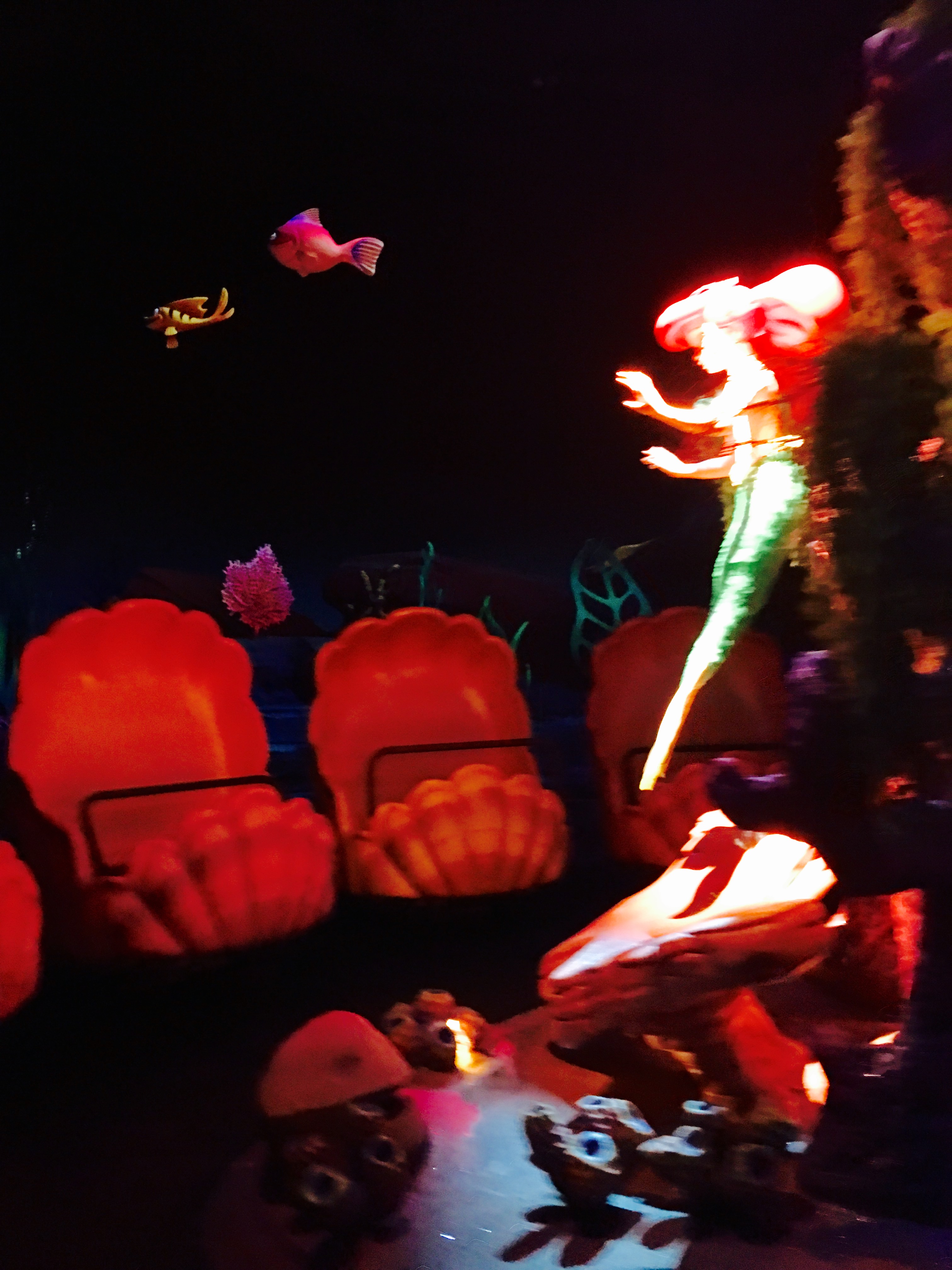 We got off of Under the Sea about the time Magic Kingdom closed. ?From here we headed to Seven Dwarfs Mine Train. ?It’s what we had been waiting for and the line was non-existent! ?It was really quite confusing in an I just can’t believe this kinda way!

This is our 7 Dwarfs pic… you’ll just have to trust me on this one. ?We rode twice, 2 times in a row. ?We didn’t even leave the main area, no walking the que the second time. ?Just right back on the ride. ?The attendant says, “pick anywhere, it’s up to you”. ?That never happens at Disney either! ?We choose the back and it is now official… the back is the BEST place to ride! ?It was amazing! ?A completely different ride than anywhere else in the car!

From there we headed for our first of many Mickey ice cream bars. ?Well, Samantha did anyway. ?No ice cream for this poor girl! ?We sat, she ate, we broadcast live on Facebook, we sat longer. ?Remember we’re too old to be out this late, and then we just sat some more, in awe of the fact that Fantasyland was empty! ?EMPTY!

Up next after our endless sitting, Facebooking live and just sitting was Peter Pan’s Flight

We forgot the on-board selfie, so we opted for this one… hum sorry for the bad angle.

After Peter we walked freely, without dodging people or small children, or strollers or any of the endless things that makes it hard to cross the path from Peter Pan’s Flight to It’s A Small World and again, walked right on board… right on! ?The longest part of the line, was just walking the que, which is actually REALLY long when you’re walking it and not waiting in it! 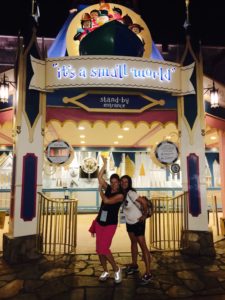 The selfie was terrible, so we went with this picture. ?A Cast Member took it for us. ?And to get us and the sign in, she walked clear across to Peter Pan and just snapped the shot! ?Without anyone else in the way or waiting for our picture to be taken! ?It’s just me, Samantha and the Cast Member! ?I’m still overjoyed by this!

Haunted Mansion was next… 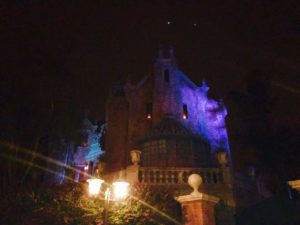 It’s too dark inside for a doom buggy picture, however I supposed we could have used the flash. ?Typically a no, no… but NO ONE was there!

Unfortunately, it started to rain a bit at this point. ?Not hard, it was tolerable with a poncho, so we headed over to Big Thunder Mountain. ?No picture here because by the time we got there it was really raining. ?We walked on the attraction, picked our own seat, all which is feeling normal at this point, (lines and being told what car to get on will never feel the same again) and then off we went! ?Big Thunder in the rain, not so great. ?Nothing like rain drops in your eyeballs and you flailing around on the ride! ?So we only rode once and then headed to Main Street!

We were full of laughs and just enjoying the evening, but no longer felt like we had to ride everything! ?But you could, you could for sure if you wanted too.

Cinderella’s Castle and the Partners statue, with no one else around…. we were dying!

I have enjoyed this view before with an early morning, before the park opens, breakfast reservation. ?It is a gorgeous view then, but it is absolutely spectacular at night!

We stood there in awe, for 30-45 minutes doing nothing but enjoying and taking in an almost empty Magic Kingdom. ?It was beautiful!

Every once in awhile, some Disney magic would pop up. ?Like this double Decker bus that drove up and down Main Street giving guests rides from Cinderella’s Castle to the train station. ?It was never full, there was never a line to wait to get on.

As we walked down Main Street just taking it all in, we stopped and talked to the Cast Members and met a special Disney Photopass Photographer. ?I’m unsure his name, but hope someone will read this and know! ?He took the most fun photos, all while saying nothing! ?He is a mime! ?Nothing but gestures and whistling and this was the result!

The entire night was nothing but Magical! ?A special extra kind of Disney magic was in the air at Disney After Hours!

So, is the Disney After Hours ticket worth having…

Absolutely, without a doubt, ?YES!