One of the things I love about Disney is that it’s everywhere! ?You can find that fabulous mouse and his friends all over the world! ?Recently we took my step-son to NYC for a 5 day quick trip for his 18th birthday and high school graduation present! ?We saw all of the New York sites and took in some Disney as well! ?We also had a few great meals that were allergy friendly, which of course I have to share! ?Here’s a look into visiting NYC and getting some Disney at the same time!

Disney has several live Broadway performance shows right now! ?The Lion King, Aladdin and Finding Neverland! ?We were lucky enough to get to see two of the three! ?The Lion King is at the?Minskoff Theater which is one of the larger Broadway theaters. ?The theater holds 1,621 people and has performances 8 times a week! ?Despite it’s large venue and multiple performances it can still be difficult to get tickets and they are pricey! ?To see the Lion King on Broadway you should plan ahead! ?We purchased our tickets about a month before we went, which in my opinon was waiting too long! ?I’m much happier having my trips planned and all activites paid for at least 6 weeks prior if not 8 to 12 weeks prior. ?Eitehr way, we were able to get tickets and enjoyed the show. ?We had blacony level seats and still paid nearly $400 for the 3 of us to see the show! ?So save your pennies if this is something you’d like to see!

The Lion King is Broadways 4th longest running show! ?In fact it’s been running so long that I saw it when I spent a college summer in NYC nearly 15 years ago! ?If a show has run this long, you know it’s worth seeing! ?The Lion King debuted on the Broadway stage on October 15, 1997 in the New Amsterdam Theater. ?On June 13, 2006 it moved to it’s current location at the Minskoff Theater.

Front of the Lion King Theater

Looking out of the Minskoff Theater after the show onto Times Square below.

The live musical performance was amazing! ?The songs are familiar and heart warming to all of us, and it’s a story line each of us can relate too. ?The costumes were stunning and the puppetry was like no other! ?I highly recommend seeing The Lion King on Broadway!

We also saw Finding Neverland. ?My stepson was interested in seeing this show because Mr. Shoo, aka Matthew Morrison, from Glee was the staring role. ?Finding Neverland is at the Lunt-Fontanne Theater, a smaller theater in the Broadway world. ?This show offers discounted day of tickets at TKTS. ?TKTS has three locations in Manhattan with the original and most popular location located in Times Square.

Broadway runs diagonally through Times Square so it makes it convenient to get tickets for shows the same day. ?The other two locations are, South Street Seaport and Downtown Brooklyn. ?They also have an app were you are able to view daily show availability. ?They do not have every show, The Lion King is never at TKTS, but you can get tickets to some of the smaller shows. ?We were able to get tickets for Finding Neverland on the main level (not balcony) for 40% off. ?They were $70 each, which is typically the price of the least expensive and worst seat in the house. ?We were happy with our seats and the performance more than met our expectations!

In front of the theater entrance

My son was hopeful to meet Matthew Morrison

Eli Tokash as Jack and Casey Butler as George

I was really amazed at the use of special effects (think theater not movies) that Finding Neverland offered. ?The characters were convincing right down to the 4 young children that played the roles of the Davies boys. ?After the show we headed to the stage door outside the theater to meet some of the cast as they exited the theater. ?We were pleasantly surprised at the amount of time the actors/actresses spent signing autographs. ?They did not pick and choose but signed the Playbill for each fan that asked. ?Unfortunately, Matthew Morrison ducked out another door and we did not get to see him. ?My stepson was pretty disappointed. ?To make matters worse, we waiting in a large crowd for well over an hour after the show ended and no one bothered to let us know he was gone and we were waiting for nothing.

Disney Store sign in Times Square! All of the lights make it that much more fun!

The Disney Store in Times Square We’re putting on our Mouse ears in case you were wondering!

Disney cartoons playing on the marquee outside of the Disney Store

In addition to the many Disney Broadway shows Times Square is also home to the Disney Store. ?This two story store is home to your typical Disney Store merchandise as well as New York specific merchandise! ?I was totally in heaven! ?Two of my favorite things all in one place! ?I had trouble deciding what to buy!

Minnie Mouse Statue of Liberty - She had to come home with us!

We loved this Mickey Mouse too! He was wearing he I heart NY shirt!

I love this book! (My husband is an architect) 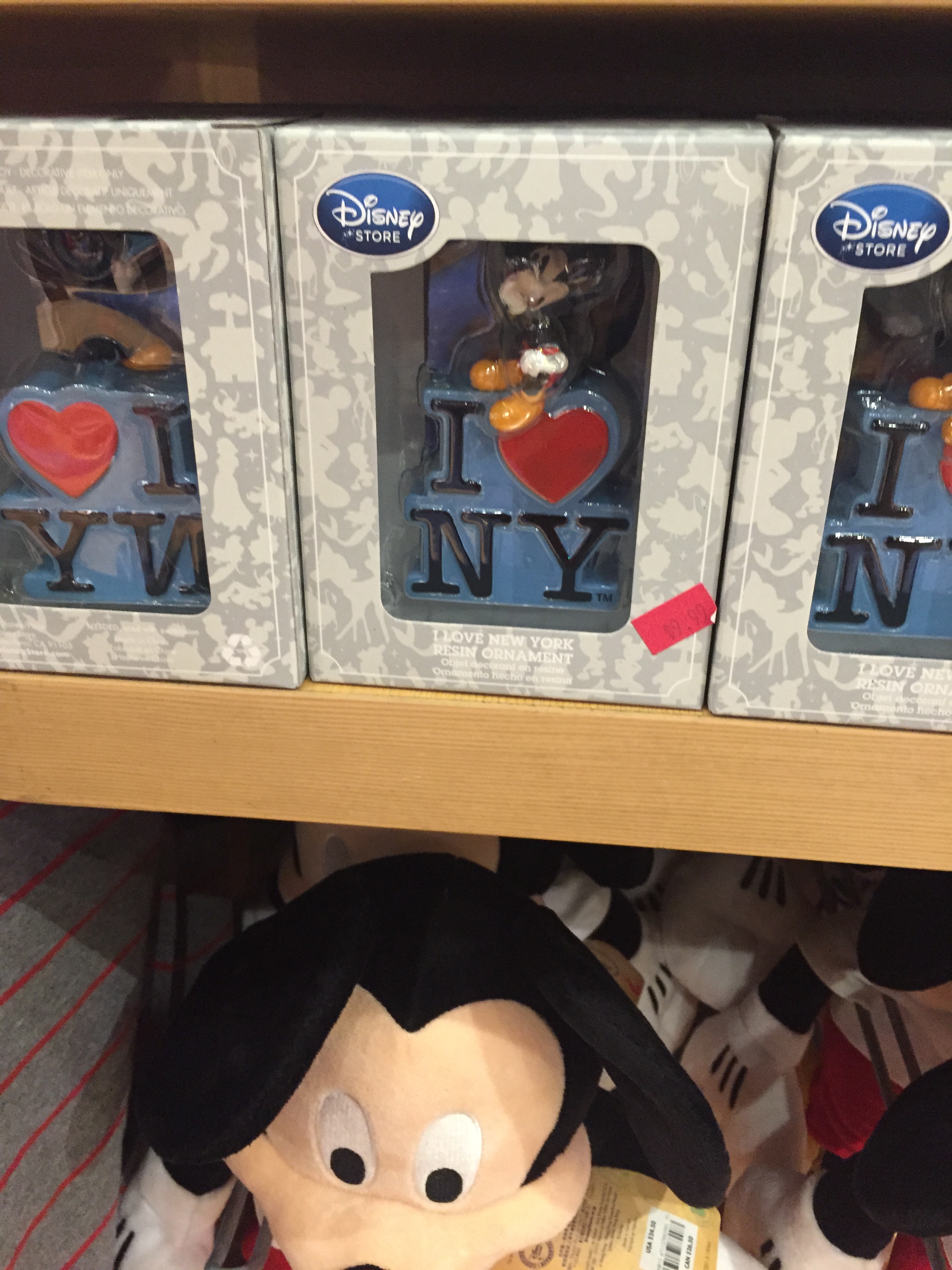 See, I told you she came home with us! 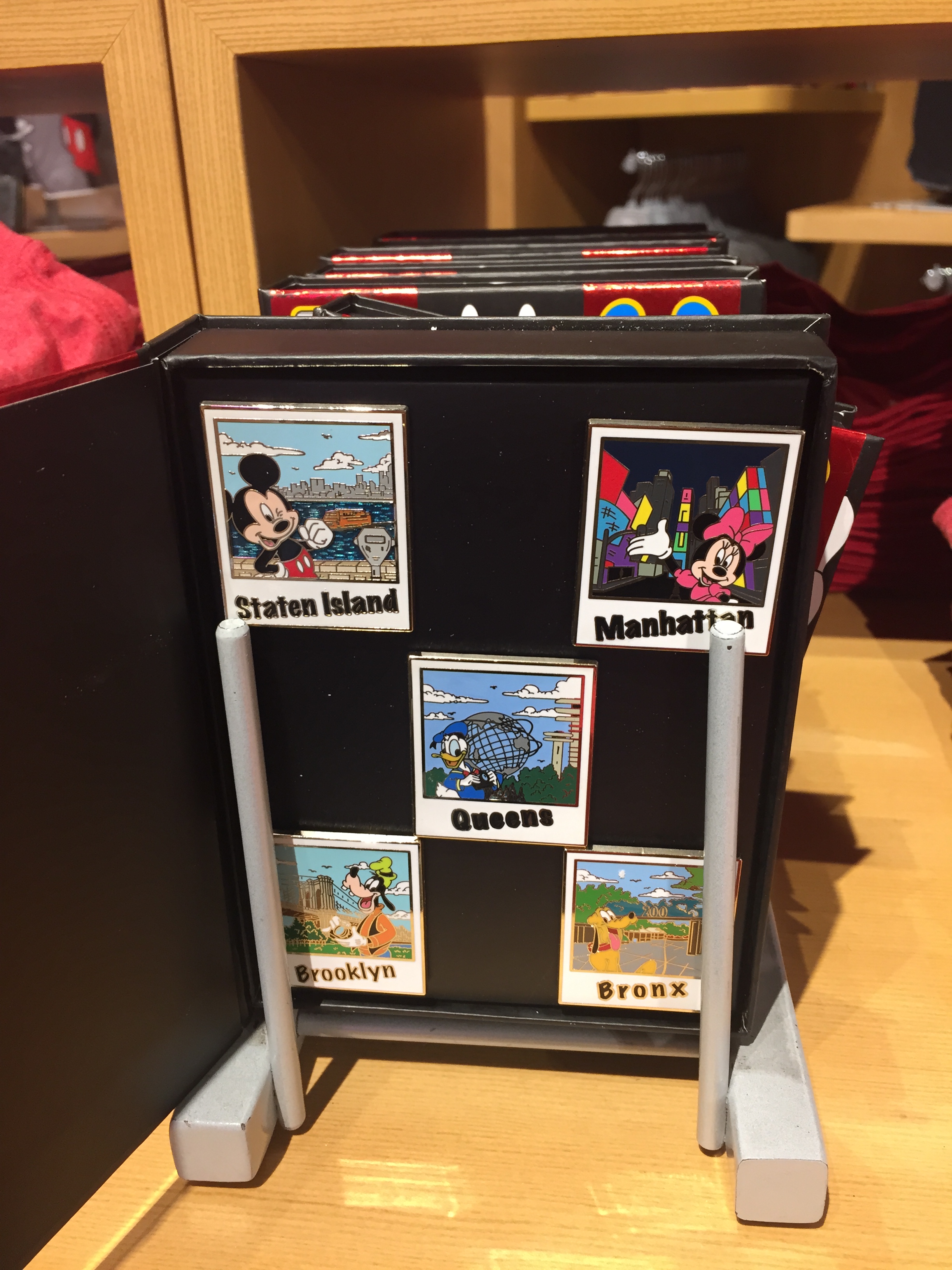 I had to have this shopping bag as well!

The ground level is home to newer merchandise, such as the most recent Disney production (in our case Inside Out) and the New York merchandise. ?The second level houses your typical store merchandise including all other movie paraphernalia and clothing items.

What's displayed in the front of the store right now

Tangled lanterns that hang from the ceiling above the escalators

Of course Frozen has to make it's appearance! This is on the second level 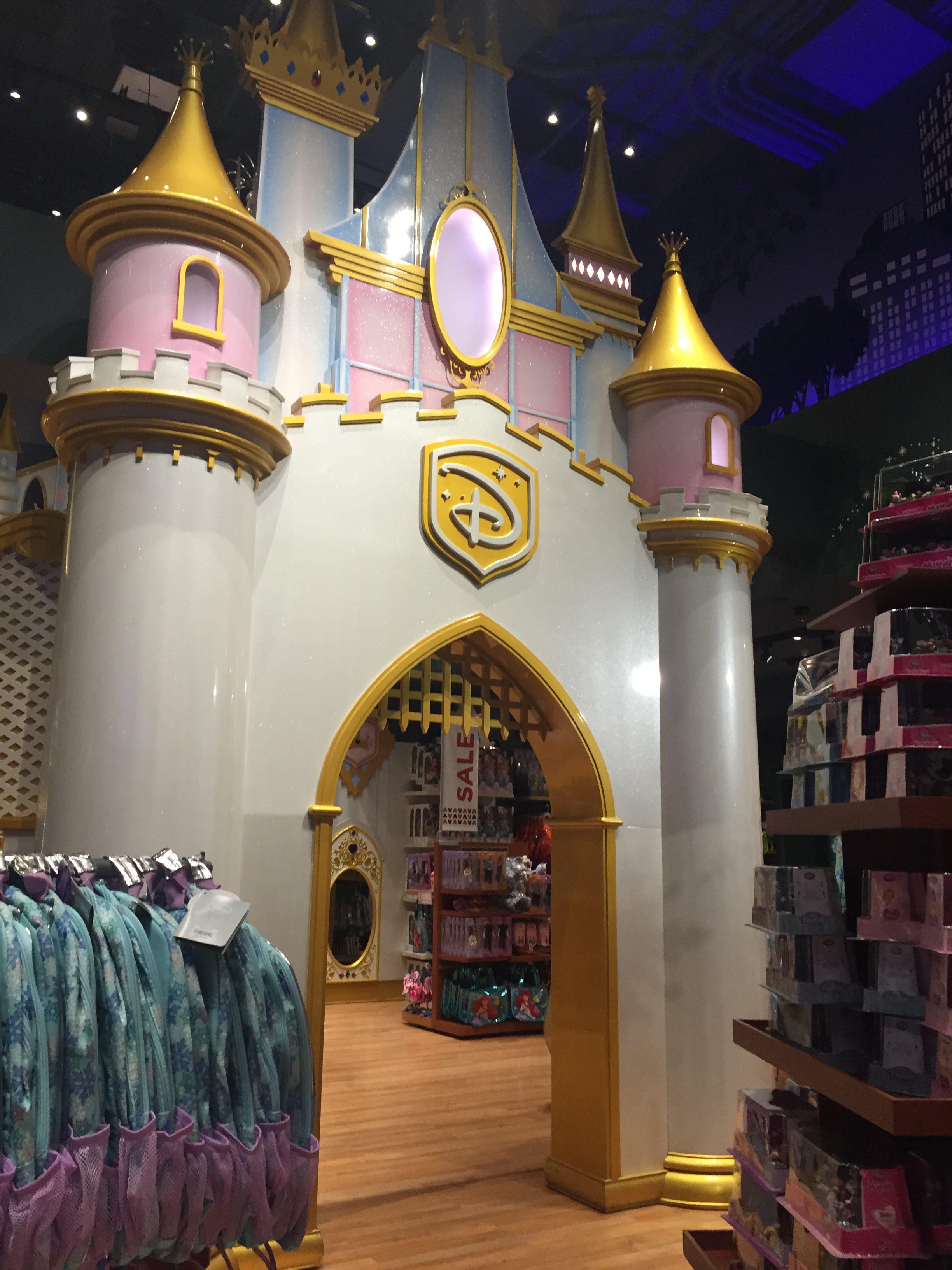 Castle on the second level

In Times Square you will also find characters around to take your picture with! ?The Naked Cowboy is the most famous of street characters along with human statues that are quite amazing to watch. ?There are many Disney like characters as well, but honestly I’m a bit embarrassed for them as their costumes don’t even come close to the real thing. ?Also, they definitely don’t understand the Disney character rules! ?I saw several headless Mickeys during my walk through! ?Not cool! ?It totally makes you love Disney even more knowing the amount of effort they put into their character integrity!

We did a whole lot more in NYC that did not involve Disney and of course I’m happy to share those things as well! ?Feel free to ask me questions and let me plan your trip to NYC! ?It is one of my very favorite All American cities! ?It is a conglomeration of all nationalities in one big city, just like America itself!

Curious about other places to visit in NYC? ?I’m happy to help! ?Ask about the locations below or any other area you’re interested in!

The Natural History Museum app has a
“Night at the Museum” Tour! ?I think this is awesome for helping to get kids interested in visiting the museum!

On past trips we have also skated in Woleman Rink (think Home Alone and other movies), taken in festivities at Times Square on New Years Eve, Watched the Macy’s Day Parade at Thanksgiving, visited The Statue of Liberty and crown, wandered Battery Park and Ellis Island, visited the Central Park Zoo, ridden the Carousel in Central Park, visited the Guggenheim, The Met, Moma and many other great museums! ?Pretty much we’ve seen it all! ?And were happy to share our knowledge and expertise with you if you ask!

For dining in NYC check here!