It’s no mystery that using the new Genie + service at Walt Disney World is complicated! It’s certainly not as easy as the old FastPass+ service, but the benefits are actually much greater – once you get familiar with how to use the system. With a little practice, it actually works really well and you can have a lot of success with it. And since we now have to pay for the service, it makes sense that you should do the research and understand it before using it. Otherwise, it’s a waste of money.

Disney Genie is the new itinerary planning tool in the My Disney Experience app that launched on October 19, 2021 at Walt Disney World.  While the basic planning tool (Genie) is free for everyone and great to help you plan your day in a very basic way, there are two components to the service that cost extra.

Genie + Lightning Lane and Individual Lightning Lane purchases replace the former FastPass+ system. Either of these options allow Guests the opportunity to avoid long lines for attractions, especially during crowded, peak seasons. Your wait times will be much shorter and you’ll be able to get on more rides throughout the day.

But, as mentioned, these two options do cost money.

Genie + Lightning Lane is $15 plus tax per person, and Individual Lightning Lane attractions (an a la carte purchase) typically cost $7-15 plus tax per attraction/per person. Both options are available to anyone that wants to pay extra to maximize their park time and minimize their time in lines. These services are similar to FastPass+ (if you are familiar) and allow faster access and shorter wait times for attractions. It’s important to remember that standby and virtual queues are still an option, Genie + Lightning Lane and  Individual Lighting Lane purchases are NOT required to enjoy the attractions and to have a great day at the parks (but they do help!).

You can purchase the Genie + Lightning Lane service ahead of time when you buy your park tickets. This will apply Genie + to the amount of days equal to the park ticket at checkout. This may or may not be necessary depending on your itinerary and plan. Honestly, the better option is to purchase Genie + on the same day you plan to visit the park. This option allows more flexibility to decide if you’ll need the Genie + option or not.

Individual Lightning Lane purchases can only be made on the day you plan to visit the park.

Remember, you must have a valid park ticket and park reservation in order to make these purchases and selections.

There are currently 7 Individual Lightning Lane attractions across all four parks – two attractions at Magic Kingdom, EPCOT and Hollywood Studios and only one at Animal Kingdom.

Here is a breakdown of what is available under each service at each park:

**Between February 25, 2022 and August 7, 2022, Mickey & Minnie’s Runaway Railway, Frozen Ever After and Space Mountain will be included via Disney Genie+ service and will not be included as an individual Lightning Lane selection. 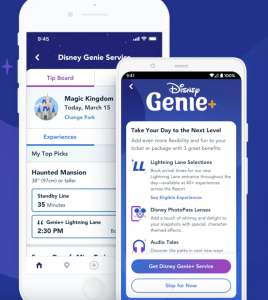 So how does all of this work? And what should you be aware of before you purchase Genie + and begin to use the system. Let’s dive in and I’ll share what you need to know to make you a pro!

Before 7am, be sure to have everything set up properly in the My Disney Experience App – have everything/everybody linked and ready to go: your resort reservation, entire party and their tickets, and ensure you have a park reservation scheduled for the day.

It’s 7am, you just made your first Genie + reservation for the day.  So, what’s next? When can I make another Genie + selection? Let’s break down how you can maximize your options and stack attractions to get on as many rides as possible!

This is when it gets a bit confusing for most! But I’ll try to make this as easy as possible. Here it goes…

The only exception to this is if you make your first Genie + Lightning Lane selection before the park opens (which you should do at 7am). You will have to wait for 2 hours (120 minutes) after the official park opening time to make another selection. The clock on the 120-minute rule starts ticking at park opening, meaning that you cannot make another Genie + Lightning Lane selection at 9am (120 minutes from 7am).

So it’s possible to “stack” reservations using either of these methods, or a combo of both.  Also note, if you purchase Individual Lightning Lane attractions, they can overlap Genie + Lightning Lane selections. That’s another way to maximize your time during the day.

It is definitely a bit confusing and takes a few times to get the hang of it. But, once you do, you’ll be a pro at it. It’s not really hard, just takes a little practice to get used to. 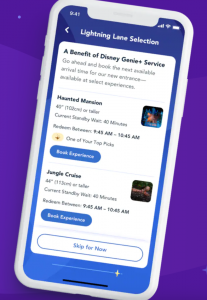 When using Genie + it’s important to know what attractions “book up” the quickest and the ones you will need to secure the fastest at 7am, otherwise you may not be able to ride them during your visit. Let’s break it down park by park.

At Magic Kingdom, the most popular Genie+ Lightning Lane reservations are Peter Pan’s Flight and Jungle Cruise. My suggestion is to secure Peter Pan’s Flight (it will probably book up the quickest) for an early morning return time, and as soon as you check in to that attraction, select a reservation for Jungle Cruise for later in the day. The rest of the attractions at Magic Kingdom should be easier to reserve.  If purchasing Seven Dwarfs Mine Train, using the Individual Lightning Lane option, you will want to do that as early as possible also. During busy times, that will sell out and time slots will no longer be available for the day.

The Genie+ Lightning Lane reservations for Slinky Dog Dash will disappear the fastest at Hollywood Studios. Be sure to secure this immediately at 7am, especially if you want an early morning return window.  If purchasing Rise of the Resistance, using the Individual Lightning Lane option, you will want to do that as early as possible also. During busy times, that will sell out and time slots will no longer be available for the day.

Genie + is the most advantageous at Magic Kingdom and Hollywood Studios. It is not necessarily needed for EPCOT or Animal Kingdom. You can actually wait until you visit the park that day to decide if you need to purchase it. If crowds are heavier and wait times are higher and you do purchase Genie +, here are the most popular attractions…

At EPCOT, Frozen Ever After, Soarin’ and Test Track are the most popular Genie + Lightning Lane reservations. Grab one of these first if they are on your list of must-do’s. If purchasing Remy’s Ratatouille Adventure, using the Individual Lightning Lane option, you will want to do that as early as possible also. During busy times, that will sell out and time slots will no longer be available for the day.

It’s no mystery that learning how to use both of these services is a bit complicated and layered. I assure you that once you get the hang of it, it’s actually quite simple and it really works! You can and will get the most out of your park day if you spend a little time getting to know and understand how the system works. I think the one downside to this process is how much you do need to pay attention to your phone. I know many like to put the phone away during vacation, but it’s required in this case.

But, here are some basic rules and tips that will help:

Can I Park Hop with Genie +?

I recommend taking advantage of early morning entry if you are staying on Disney property. You can enter any park on any day 30 minutes before the scheduled opening time for the park. Take advantage of this time, you’d be surprised how much you can accomplish. Be sure to get to the park(s) at least one hour and 30 minutes before the early opening time. So, if the park is scheduled to open at 8:30am, early morning entry is 8am, it’s suggested to arrive at the park by 6:30am. This allows you to get in and hit the bigger, more popular attractions (For example: Star Wars: Rise of the Resistance and Mickey and Minnie’s Runaway Railway in Hollywood Studios) before the general public enters the park. This will help you maximize your time and perhaps avoid the need to purchase Individual Lightning Lane attractions (as they are usually the most popular rides in the park). Get those out of the way first. Remember, in most cases you already have a Genie + Lightning Lane attraction selected (that you reserved at 7am). So by the time the park officially opens, you may have already checked 2-3 rides off the list.

It’s a fair strategy that works, but you have to be committed to getting up early and getting to the park to enter as soon as they open the gates.

While Genie+ has a lot of great pros, one big con is the amount of time you need to be on your phone and rely on technology throughout the day. It sucks up a lot of the phone’s battery. Since Genie+ is part of the My Disney Experience app, you’ll likely be on your phone quite a bit managing your itinerary. Having extra battery packs is key to not running out of juice in the parks.  Disney still sells Fuel Rods, which are helpful, but they can be a bit pricey for the small amount of charge you get. They are there in a pinch if needed. But, if you plan ahead, you can get a great battery pack from Amazon for half the price and 5x the charging capabilities. Trust me, you’ll need it.

Having trouble with Genie+? There are Cast Members located throughout the park to help. Look for the Guest Experience Team stations for assistance.

Disney for Teenagers (and Tweens, too)

This was very helpful we are planning a trip in May and wanted to take the fullest advantage of a quick trip. Thank you for clearing up how to effectively use the Genie +.

you’re welcome! Thanks for reading!