Mickey’s Not So Scary Halloween Party – 2016 Line Up

Mickey’s Not So Scary Halloween Party (MNSSHP) is one of my absolute favorite times of the year at Disney World! ?The fall decor and Halloween shows make the park extra magical! ?The 2016 dates were announced this week (3/21/2016), however the tickets are not yet on sale! ?We will be attending the party again this year, will you be going? ?Follow along below for the evening’s line up and events, along with special Halloween Merchandise and great food treats!

All about Mickey’s Not So Scary Halloween Party – 2016 Line Up!

This amazing party takes place from the beginning of September until October 31st on select nights. ?That’s 29 party nights in 2016! ??On party nights Magic Kingdom closes early and opens to ticketed Halloween Party guests only. ?The party doesn’t start until 7 pm, but guests can enter as early as 4 pm. ?At 7 pm Cast Members will politely ask the daily park guests to leave. ?Each Halloween Party guest is given a wrist band so that Cast Members can identify them. ? When the party starts, Magic Kingdom transforms into a spectacular Halloween night complete with trick-or-treating, special character meet and greets (think Villains you typically can’t find) and Halloween Party only shows and parade. ?It’s really a night you don’t want to miss!

Extra ticket event – Many people grumble at the thought of paying for an extra ticket, but this ticket is worth having. ?Because the evening sells out, this means lower crowd levels and shorter ride lines for guests! Not to mention all of the other festivities?I mentioned above. ?If you arrive at the park at 4 pm and leave at 12 am, that gives you 8 hours in the park. ?The ticket prices vary by day (weekends being more expensive) but have been about $79 per adult, less for kids, in previous years. ?2016 ticket prices have not been announced at this time. ?At that price, your hourly cost is less than $10 per hour. ?A great deal if you ask me!

In past years, this is the ONLY time adults were allowed to wear costumes in the park! ?While kids are always invited to dress up like their favorite characters, Disney does not allow adults to come to the park in costume EXCEPT at the Mickey’s Not So Scary Halloween Party! ?This years party doesn’t seem to be any different. ?However, they are asking that adults do NOT wear any costumes that “wrap the body” or could conceal weapons. ?Hopefully more details as to what is and is not allowed will be given closer to the dates. ?So it seems that adult costumes are welcomed, but must be family friendly, and not bulky enough for anyone to conceal items that are not allowed in the parks. ?Nothing scary or gory has ever been allowed, and this year will be no different! ?Do remember, it’s still Florida and still humid, so make sure your costume is comfortable in the heat. ?Don’t want to dress up? ?That’s ok too! ?Also new this year, on party day, along with all other park days, no guns or weapons (or any toys that look like guns are weapons) are allowed! ?I know rules can seem to ruin some of the fun, but I assure you, Disney makes rules to keep all of our safety and fun in mind!

Here is what is posted exactly from Disney on costumes: ?”New this year, we have revised our costuming guidelines for special events in our theme parks. While costumed attire may be worn, guests ages 14 and older are strongly discouraged from wearing layered costumes or costume props that surround the entire body as they may be subject to additional security screening. Additionally, costumes may not contain any weapons that resemble or could easily be mistaken for an actual weapon.”

One of my favorite parts of Disney is meeting the characters! ?It’s what makes the magic happen in my mind! ?During the Mickey’s Not So Scary Halloween Party the characters come out dressed in their own Halloween attire. ?This is also the time to meet characters you typically don’t find in the parks. ?So get your camera ready and go see your favorites!

The following meet and greets are the 2015 line up! ?I will update 2016 as soon as the info has been released. ?For now, I thought I’d leave this here, so you could see what Mickey’s Not So Scary Halloween Party has in store for you!

Princesses – in Fairytale Hall (not in Halloween attire)

Villains – throughout the park

Lotso – from Toy Story in Tomorrowland

Jafar – Near Magic Carpets of Aladdin in Adventureland

Mickey’s “Boo-To-You Halloween” Parade – My favorite parade of all time!

Special effects pictures are available throughout the park! ?You’d be amazed who shows up in your photo!

There is trick-or-treating throughout the park at Mickey’s Not So Scary Halloween Party. ?You can find the locations on the map, marked with orange pumpkin Mickey heads. ?Bring along your own trick-or-treat bag as the one’s Disney hands out can be a bit flimsy. ?You can also purchase “Mickey Pumpkins” (just like your typical plastic pumpkin with a handle) in the Emporium.

2015 Treats: Disney themes everything! ?So why not the food too! ?Extra fun treats are here for you to devour during the party! ?Not allergy friendly though, sorry friends! ?Spider and Monster cupcakes will be available in the Main Street Bakery and you can find a ghost cupcake at Gaston’s Tavern. ?Not feeling like an adorable cupcake? ?You can also indulge in a Candy Corn Soft Serve Cone at Storybook Treats!

In addition to Disney’s regular Halloween merchandise you can also get a few ?Mickey’s Not So Scary Halloween Party”event” items.

2015 Merchandise: This year they have an event T-Shirt, a special edition Magic Band and a Special Edition Trading Pin. ?All of these items except the pin can be found at The Emporium. ?The pin will be at The Frontier Trading Post.

5:30 – Stand in line for character meet and greets. ?If you want to meet Jack and Sally or the 7 Dwarfs line up for them early!

9:00 – Find spot for Celebrate the Magic, Hallowishes and the Boo to You Parade

12:00 am – Watch Hocus Pocus Villain Spelltacular – You can make your way towards the stage after the parade while most of the crowd is leaving. ?Note: Sitting in front of Cinderella’s Castle is not ideal for watching the Hallowishes fireworks and Celebrate the Magic show. ?If he 12 am Hocus Pocus show is too late for you, you can always add it in at 8 pm during the suggested Trick-or-Treat, shopping and ride time.

Below is the Mickey’s Not So Scary Halloween Party Map for 2015. ?You click the link for a printable PDF map of your own! Of course, they will be handed out at the front gate on party nights! 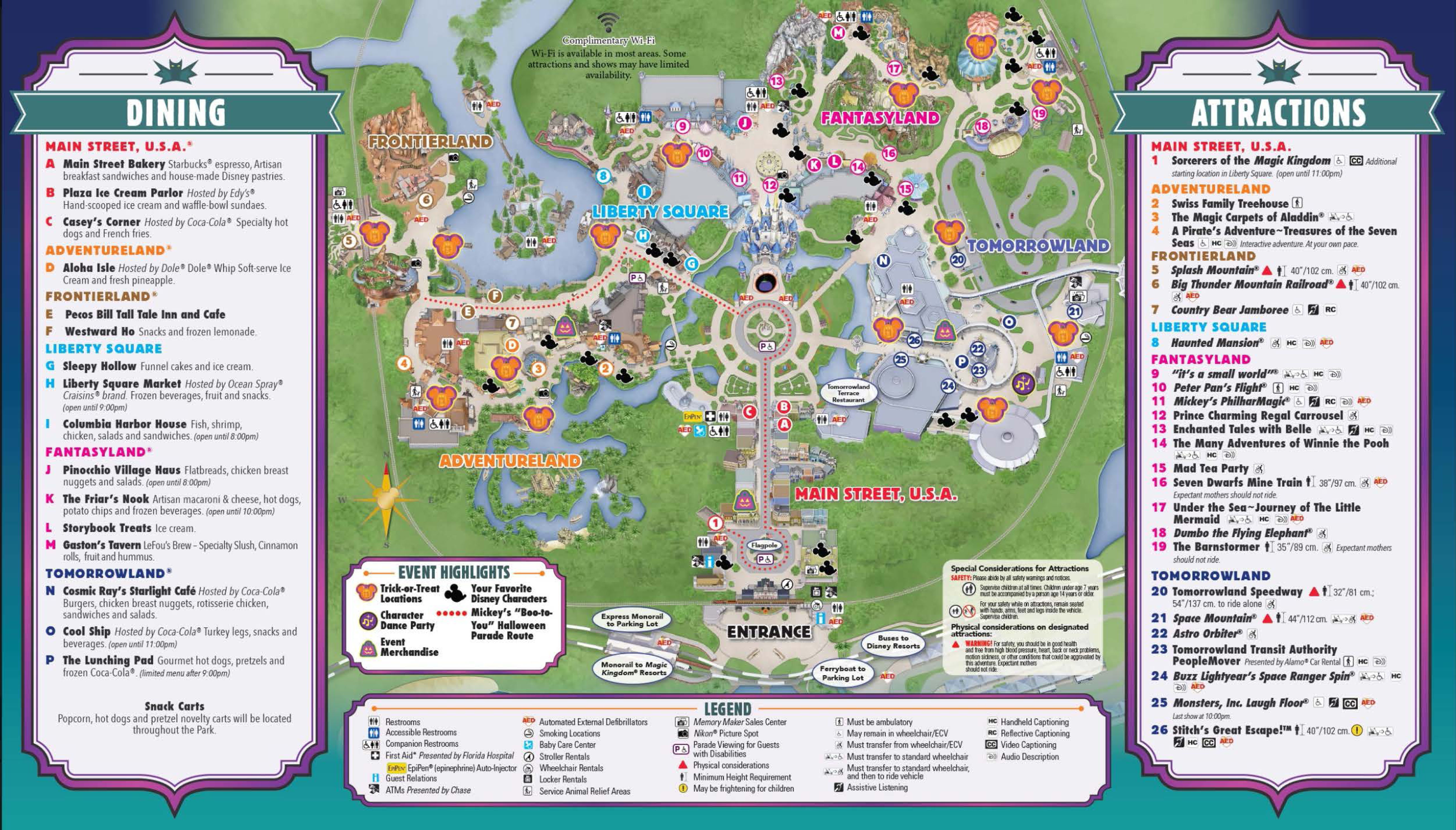 […] all you ever need to know about Mickey’s Not So Scary Halloween party, read my […]

[…] all you ever need to know about Mickey’s Not So Scary Halloween party, read my […]