Worried about taking toddlers on the dark rides in the Magic Kingdom at Walt Disney World? Here’s everything you need to know for making sure they have the best time and don’t get scared.

Traveling to Walt Disney World with children, specifically toddlers, is a very different experience than traveling with adults or older children. There are many things to take into consideration, including if you have a toddler that often gets scared or frightened. You may want to be extra cautious when taking them on the following list of my top 8 dark rides in Magic Kingdom.

Not all of the rides noted are necessarily “scary” in nature, but they are considered “dark rides”, which may make children uneasy. As we walk through the list of rides, I’ll share tips for each on how to best approach the attraction with littles.

So what is a “dark ride”? A dark ride is typically a slow moving indoor attraction with low lighting (sometimes total darkness), often a catchy tune, animation and some sort of special effects.

Walt Disney World is best known for its incredibly themed attractions and all are created for families of all ages. Magic Kingdom is the most toddler-friendly park of all four parks, but there are still rides that may make your child a bit hesitant and nervous. Every child is different and every parent knows their child best, so while I can offer tips and recommendations to ease a toddlers mind, it’s up to the family to make the ultimate decision on what is best for their family. 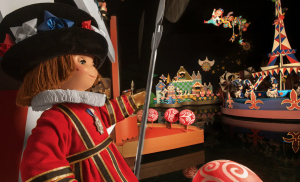 “it’s a small world” is not necessarily the scariest or darkest ride in the park, after all, it’s the “Happiest Cruise that Ever Sailed”. Not to mention the little dolls that represent little children from around the world can be a little scary for some toddlers (and let’s face it, for some adults too!). For the most part, this is a joyful, sweet attraction with a catchy song that won’t get out of your head for the rest of the day!

Tip: I recommend sitting toddlers in the middle of the row, preferably with adults on either side. Any child feels more comfortable if they know they have someone next to them to protect them if they get scared. 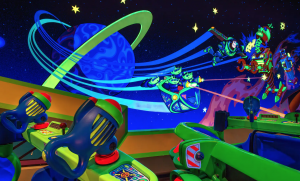 Buzz Lightyear SpaceRanger Spin is an interactive game/attraction that is tons of fun for children and adults alike. Become a certified Space Ranger and help Buzz Lightyear defeat Zurg by using your laser gun to rack up those points throughout the game. This ride does have some loud noises and the villain Zurg may actually make some toddlers a bit scared.

Tip: Keep toddlers focused on the game itself and shooting the laser gun to keep scoring those points. Let them have control of the joystick that spins the ride vehicle so you can see all the action around you.

The Many Adventures of Winnie the Pooh 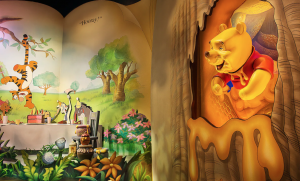 Everyone loves this little cuddly bear! The Many Adventures of Winnie the Pooh is one of the sweetest rides in the park. Join Pooh and Friends as they take you on an adventure in the 100 Acre Woods. There are few dark rooms within the attractions with wind and rain sound effects. You will also “bounce” your way through a scene with Tigger, where your attraction vehicle literally moves up and down. These scenes might cause some concern for some kids.

Tip: Watch a YouTube video ahead of your trip and show your toddler what the ride is like. This might help ease their worries and see that the scary parts aren’t all that scary after all!

Under the Sea: Journey of the Little Mermaid 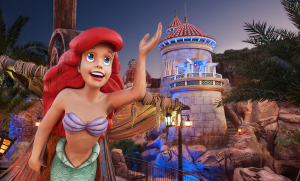 Take a slow and enchanting ride under the sea and join Ariel and friends on an incredible 6-minute journey re-telling her tale from fins to feet. While much of the ride is lighthearted and joyful, there are darker, scarier scenes with Ursula. The sheer size of Ursula alone may frighten anyone, let alone children. Keep this in mind when riding this attraction.

Tip: Similar to that of “it’s a small world”, seat your toddler in the middle of each adult in the “clam shell” ride vehicle. This way they will feel secure and protected when going through these short and brief scenes.  Also, the attraction is filled with the classic songs from the original animation. Start a sing along on the ride to distract a scared toddler! 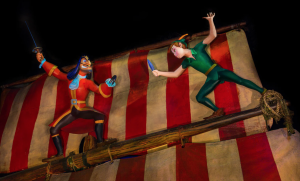 Off to Neverland! Inspired by the 1953 animated film, this attraction is a classic. Follow Peter, Wendy and Tinkerbell on a magical flight of a lifetime! Cruise high over London and then descend into Never Land between glowing volcanoes and sparkling waterfalls. But don’t get too comfortable as there is danger ahead! Can Peter Pan defeat Captain Hook and return everyone safely to London? You’ll have to ride to find out.

This is a quintessential dark ride at Walt Disney World. While no one part of it is overly scary, there are some darker scenes that toddlers may find frightening. I recommend distracting them with something else until the scene passes. The ride itself is extremely short, and you’ll be onto something else in no time!

Pirates of the Caribbean 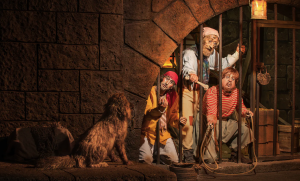 Ahoy mates!! Set sail on an 8-minute swashbuckling adventure through dark towns and creepy caverns with rum-loving pirates and our favorite Captain Jack Sparrow. Join in and sing along to their anthem “Yo Ho Yo Ho, (A Pirate’s Life for Me!)” as you drift through a burning seaside town and navigate cannon fire on the high seas.

Tip: The boat vehicle for this attraction seats about 12-16 Guests. Similar to other ride vehicles, I suggest sitting littles in the middle of adults. They’ll be less scared of the animatronics and loud gunshot/cannon noises and this also prevents them from putting their fingers in the water outside the boat – this is dangerous! 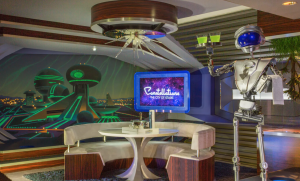 Blast off and zoom through space in your rocket rounding turns and corners on a dime. At least that is how it feels! This could possibly be one of the more frightening rides at Walt Disney World for your toddler if they are indeed scared of the dark. If your toddler doesn’t like thrill rides or the dark, this one might be an easy skip! This whole ride is essentially pitch black with laser beams/lights shooting through the dark sky above representing meteors and comets. The roller coaster feels faster than you are actually going, but to a toddler it’ll feel like lightening speed. And because you don’t know what’s ahead, this can be scary. Hold on to your little tight, or skip this one altogether if they aren’t a fan. 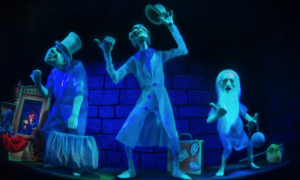 There are 999 happy haunts here, and there is room for one more…any volunteers? Your toddler may or may not raise their hand! And if not, it’s completely understandable. As a kid, I was scared of everything (still am technically), and the Haunted Mansion at Walt Disney World frightened me. I don’t like ghosts, goblins and murderous brides (attic scene). While none of the scenes on the attraction are overly gory or terrifying (like a true Halloween movie), they could be frightening for littles. Much of the attraction is dark and haunting. And the opening pre-show Stretching Room scene does get pitch black at the end with a skeleton hanging from the ceiling.

Tip: The pre-show can be bypassed if you think your little one will be too scared – ask one of the Cast Members and they will take you around it and directly to the loading area for the ride itself.

Another tip: If your toddler is really scared, just don’t take them on this ride. It’s ok to miss out on one or two if needed. Best not to traumatize them.