Alligators, Where to see them in Florida

There?s a huge fascination with alligators in Florida.? They?re a wild creature with habits that are hard to understand. They seem scary and like we?re all about to be their lunch. But in reality, they?re just as scared of us as we are of them. Don?t get me wrong, you should be overly cautious and not dip even a single toe in the waters of Florida. But if you?re curious to know more about these creatures, there are so many places to see them safely and in the wild!

Of course, we?ve all seen gators in the zoo or even the crocs on Kilimanjaro Safaris at Disney?s Animal Kingdom. But seeing them in the wild is an entirely different awe-inspiring experience!

By the way, do you know what the difference between a crocodile and an alligator?

An alligator has a wider u shaped nose whereas a crocodile has a move v-shaped toothy mouth.? I have to say, if I see one in the wild, I am not going to stop and study its mouth shape!? But I digress.

Back to where to see alligators while visiting Florida!

Recently my family and I have spent more time exploring places in our backyards besides Disney World.? We spend a lot of time at Disney World and want to know more about our new home state!? A month or so back, we took the day and visited Gatorland.

Gatorland is a funny joke at my house. A few years back, before we lived in Florida, my husband had a business trip here.? The girls and I tagged along, as we sometimes did and that sweet husband of mine tried to ban me from the Magic Kingdom!? Funny right? His words, “go to Gatorland, don?t spend the money to go to the Magic Kingdom”! The man is cheap!? I laughed, cracked some jokes and ultimately went to the Magic Kingdom! Shocking to no one!

The girls and I at Magic Kingdom in January 2105 when Jeremy told us to go to Gatorland instead of Disney.

Since then Gatorland has been the butt of a lot of jokes in my house. So when I announced the girls and I were going to Gatorland one day over Spring Break, it too was a joke. But off we went. And to my absolute surprise, Gatorland was not only pretty cool, it was downright interesting!

Yes, of course, there are hokey things like Gator Wrestling (which turns out to be mesmerizing) and the infamous Jumparoo Show. But it?s also an alligator breeding marsh. Believe it or not, at one point alligators were on the endangered species list. And while some may say, good riddance, in reality, they?re a healthy part of our natural ecosystem.

At Gatorland, they work hard at providing a natural environment for them to breed (and be bread). This wildlife preserve and breeding marsh have become a free flight aviary for birds of all species.

These are not birds that Gatorland purchased and put on display.? They are birds that are attracted to the natural habitat that has been built and preserved right here in Central Florida. Interesting right?

So, if you want to see gators up CLOSE, like really, really close and not in a cage or zoo type enclosure.? In a space where they swim and live naturally, Gatorland is a fantastic option!

You can see all of our pictures from Gatorland on my Facebook page here.

A second and even more natural place to see gators and Florida?s unique population of birds is at the Lake Apopka North Shore Natural Wildlife Drive. This 11-mile nature drive is about 30 minutes from Disney World. You should plan to spend several hours here.? There is so much to see! (and the speed limit for 11 miles is at 10 mph)

Lake Apopka is Florida?s 4th largest lake and in the 1940’s nearby farmers used it as irrigation water for their farms. After decades of pesticide runoff, the damage to the Lake and its ecosystem appeared to be irreparable. After many more decades of science-driven practices, the Lake is starting to come around. The abundance of gators and birds in the area show that rehabilitation can happen even after mankind takes its ugly toll on it.?While driving makes sure to listen to the free informational talks that can be streamed via your phone on how the drive became what it is now.

Roll down your window and take in all the sounds of nature you’ll hear.? It’s mesmerizing!? And keep your eyes peeled for gators!

The birds are everywhere and not hard to spot. In fact, pick up one of these at the pump house about 2 miles into the drive and see if you can spot all the different kinds of birds! 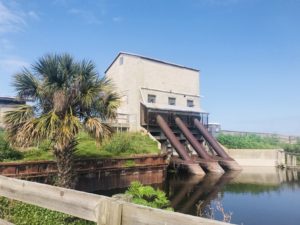 But I mean really, who?s here for the birds?? We went to see gators! And gators we saw. The first few miles of the drive they were harder to spot, but then they seemed to be in abundance. Swimming, sunbathing and just being alligators. They?re really boring lazy creatures after you get over them just being alligators.? 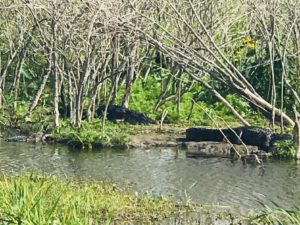 At one point my hubs said, I want to see one right there… pointing to the side of the road, like as we drive by, well the alligators didn?t disappoint. Voila, gator right there… less than 3 feet from the car.

I?m all fine and dandy with that proximity as long and there a big hunk of metal with a gas pedal between me and the gator. It?s crazy and scary how they hide in plain sight!

The Wildlife Drive is a great way to explore Florida and it?s natural habitat.? Exploring areas of Florida like this often makes me wonder what Walt experienced and saw when he came to Florida looking for the home of his second Disneyland. One he dreamed to be bigger and far more expansive than the original. We know what Walt was after and why he chose Orlando, but what an amazing foresight he had to have had when you look at the still existing swamplands of Florida!

My next stop for alligators and Florida exploration, the Everglades! I?m dying to get on an air-boat and see the area up close, again with the safety of a big hunk of metal and engine powered pedal!? Have you visited the Everglades?? What should we not miss while we’re there?

What areas in Florida have you explored that we should visit?? Comment and let me know so I can add them to my list of must-see places!

All the Fall Things for the Perfect Autumn...

There is more to Florida than Just Theme...

Why you should plan a day to visit...

Five Places You Can Visit Now

Top 10 Key West Plus One More