Top Posts
Jamie’s Destination “Do”s and “Don’t”s: Paris and Disneyland...
Top Disney Springs Restaurants
Choose Your Own Adventure: The Perfect All-Inclusive Vacation...
Top 5 Disney Wish Highlights
The Merriest and Most Magical Place on Earth:...
What to Pack and Know for Your Disney...
The Perfect European Holiday Vacation: A Christmas Market...
Guide to Mickey’s Not-So-Scary Halloween Party 2022
Spotlight on Sandals and Beaches All-Inclusive Resorts
The Perfect Mexican Beach Vacation
Home » Florida » Why you should plan a day to visit The Kennedy Space Center during your next Florida Vacation
Extra MagicFloridaTravel News

Did you know that you can witness, live and in person, an actual Space Launch? 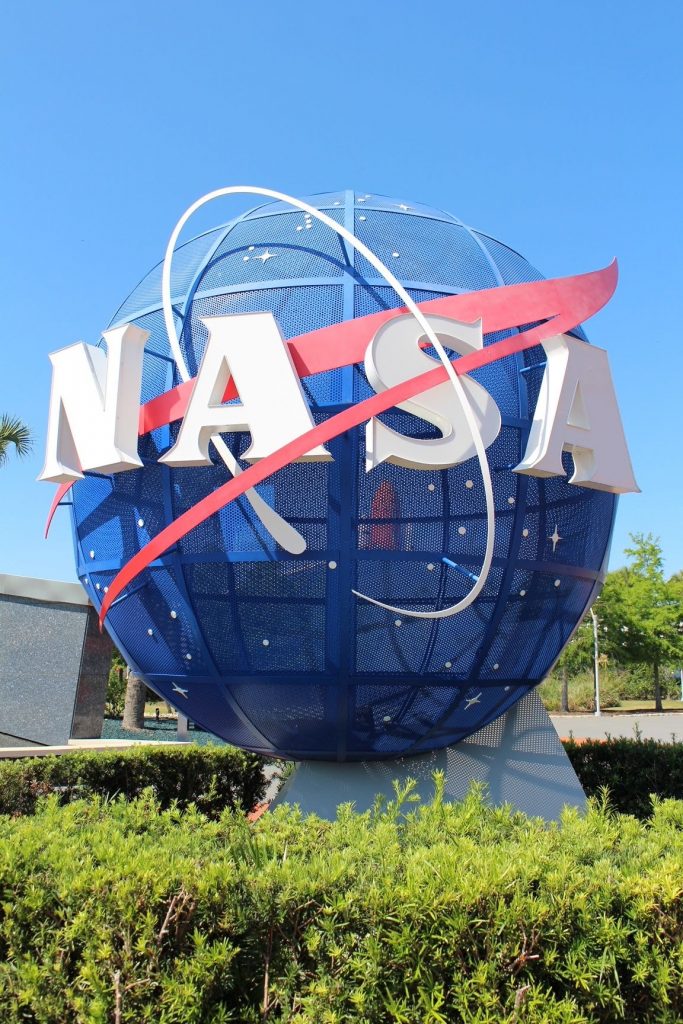 The Kennedy Space Center has a limited number of tickets available for almost every Space Launch Event, so that you can be part of America’s Storied Space History! Launches are listed as they are scheduled on the Kennedy Space Center’s Calendar of Events, which can be found here (though word to the wise: unless you are a super flexible traveler, or live in the area, don’t plan an entire trip around a launch because they are often delayed for days or even weeks, due to weather and a host of other behind-the-scenes variables).

Even if you can’t make it to a launch, the Kennedy Space Center Visitor Complex is well worth a visit, whether you are in the Orlando area on vacation, or if you are a Florida resident year round, you won’t regret planning some time at this historic destination.

Located near world-renowned Cape Canaveral, just an hour drive from the Disney Parks area, the Kennedy Space Center Visitor Complex makes for a perfect day trip from Orlando. And just like the Disney Parks, the Visitor Complex is full of hundreds of experiences to choose from. Below you will find a Must-Do Experience Guide and some suggestions to help you prepare for your visit.

This brand new attraction is focused on what is happening right now in the Space Program, and what we have to look forward to in Space Exploration. Highlight from this Exhibition include –

Also brand new, Spaceport KSC is a motion theatre ride with four distinct space journeys (Cosmic Wonders, Daring Explorers, Red Planet and Uncharted Worlds) to areas of space yet to be explored, such as Mars, Trappist-1, a Horsehead Nebula, Saturn, Jupiter, and more uncharted territory. This ride does have a height restriction (39 inches), and also has an Observation Bay for anyone who wants to experience the ride without the motion aspect.

In this new immersive playspace, kids ages 2-12 can explore space in a whole new way. Budding Astronauts can walk on Saturn’s Rings, slide through an asteroid belt, climb up a worm hole, and map a constellation, among other interactive games and artistic components. This multi-level play area is indoors to make entertainment for the littlest guests available year round. 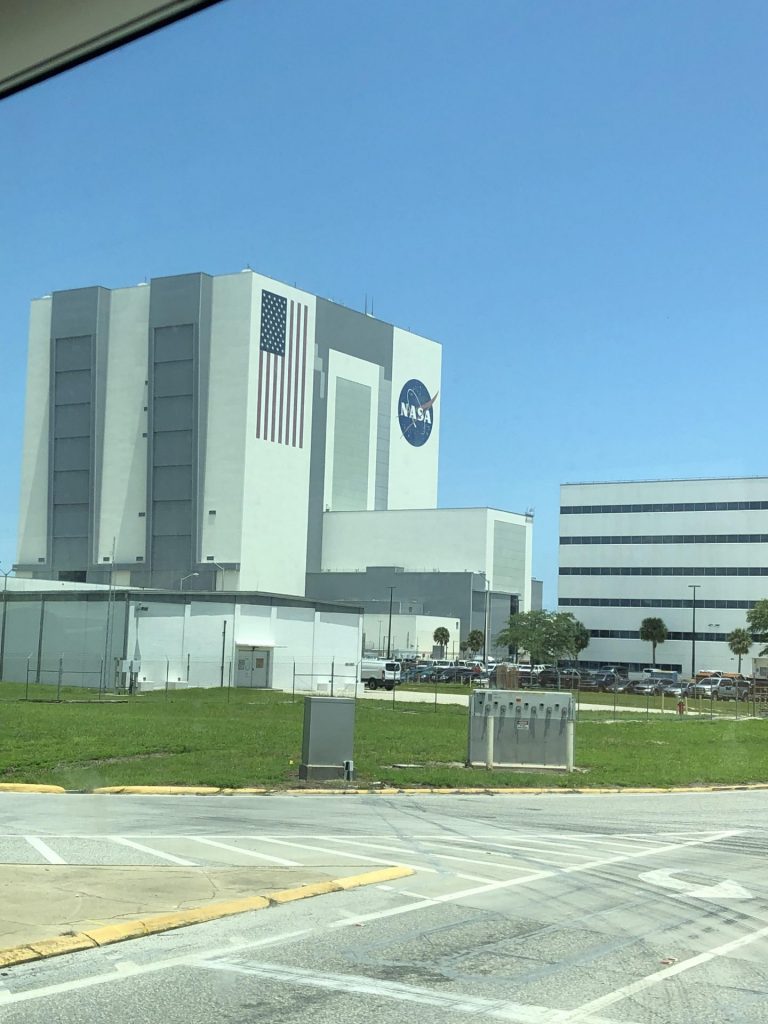 Returning: Mission Zone: Behind the Gates

Get a behind-the-scenes look, and viewing access to restricted areas of Kennedy Space Center, where mission-critical operations take place. Throughout the tour, you will hear from local space experts in their field, as you take in the sights of the Vehicle Assembly Building, where space ships and shuttles have been built and rolled out, to the launch pads where astronauts have taken to the skies and stars for decades. Because the Kennedy Space Center is a working facility, where shuttles are still built and launched, tours may be rerouted, depending which areas are currently in use, or require heightened restrictions, but no matter which way your tour is rerouted, there is always plenty to see! 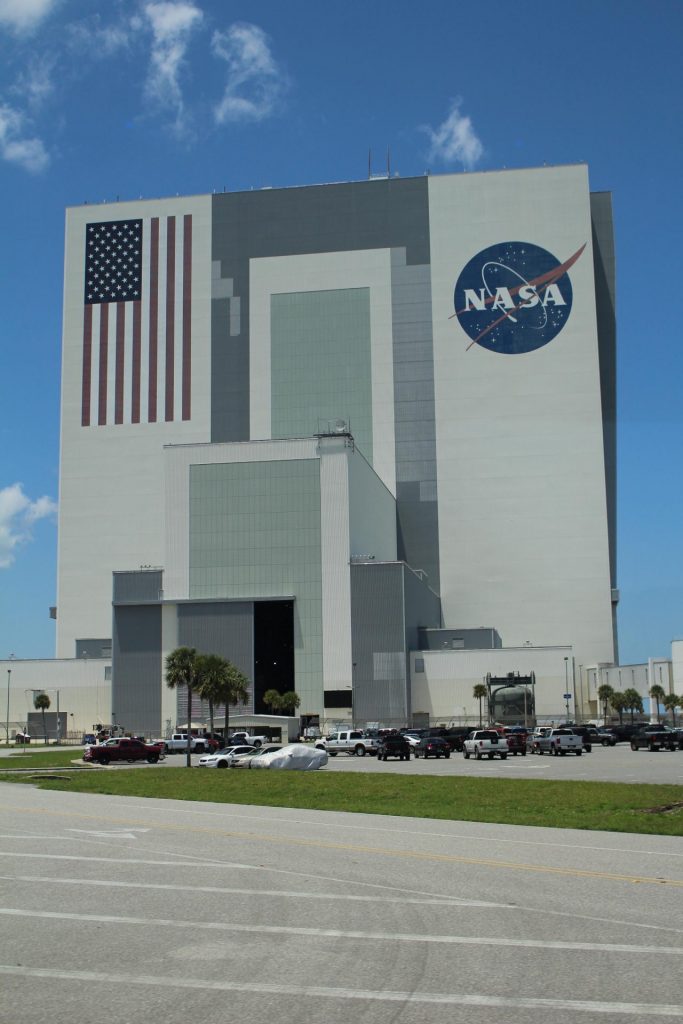 If you want a tour that lets you off the bus, this is the one for you! While the Kennedy Space Center Bus Tour is included with your daily admission ticket, if you’re looking for something a little more up close and personal, the KSC Explore Tour is the way to go. Though it requires an extra ticket, this tour will afford you a space expert guide, and multiple stops to get out of the vehicle and grab some once in a lifetime photos in front of iconic Space buildings and structures.

Both Tours will end at the Saturn V Rocket (detailed below). 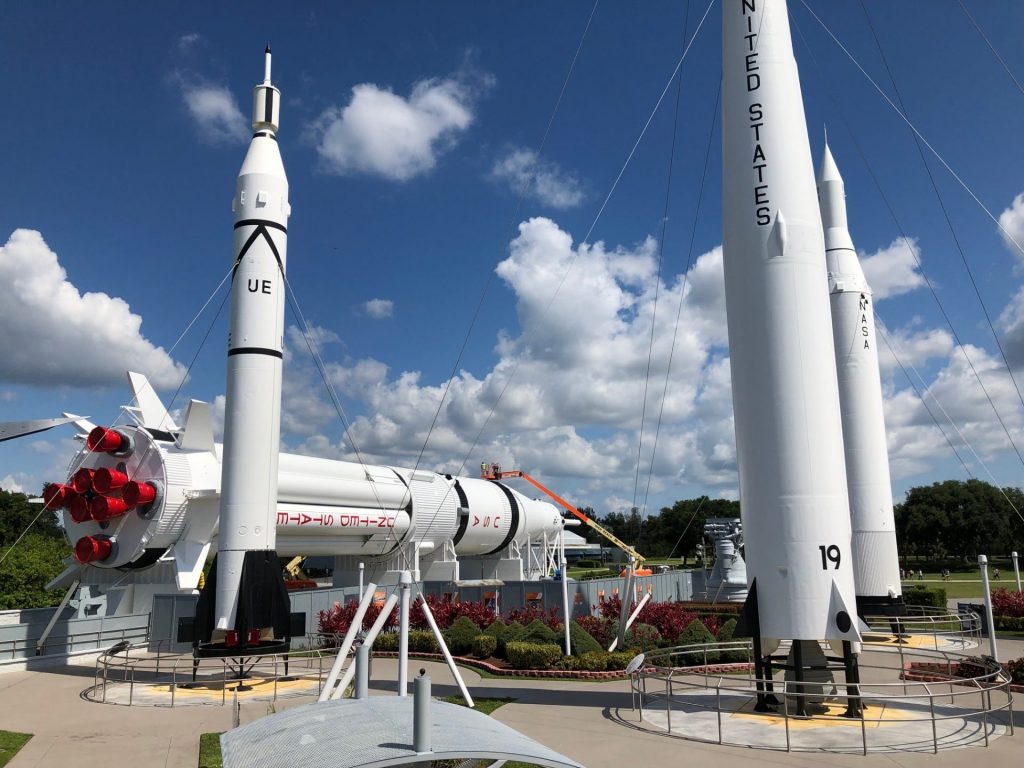 Upon entering the Visitor Complex, scraping the sky before you will be the Rocket Garden, where you can walk among the rockets used in NASA’s Mercury, Gemini and Apollo missions. These original rockets were the stars of the Space Race, of course along with the astronauts who flew them and are just as awe-inspiring now as they were then. Visitors are free to explore at their leisure, and guided tours are also available.

Learn about the men who flew the original rockets featured in the Rocket Garden during the dawn of space exploration in this immersive experience featuring actual artifacts such as the Redstone rocket, Sigma 7 capsule, and also, get a close-up view of the Gemini 9 capsule. This experience culminates at the U.S. Astronaut Hall of Fame, which celebrates everyone involved in space exploration thus far, not just the men who were the face of the organization in its early years.

Mission Zone: Race to the Moon 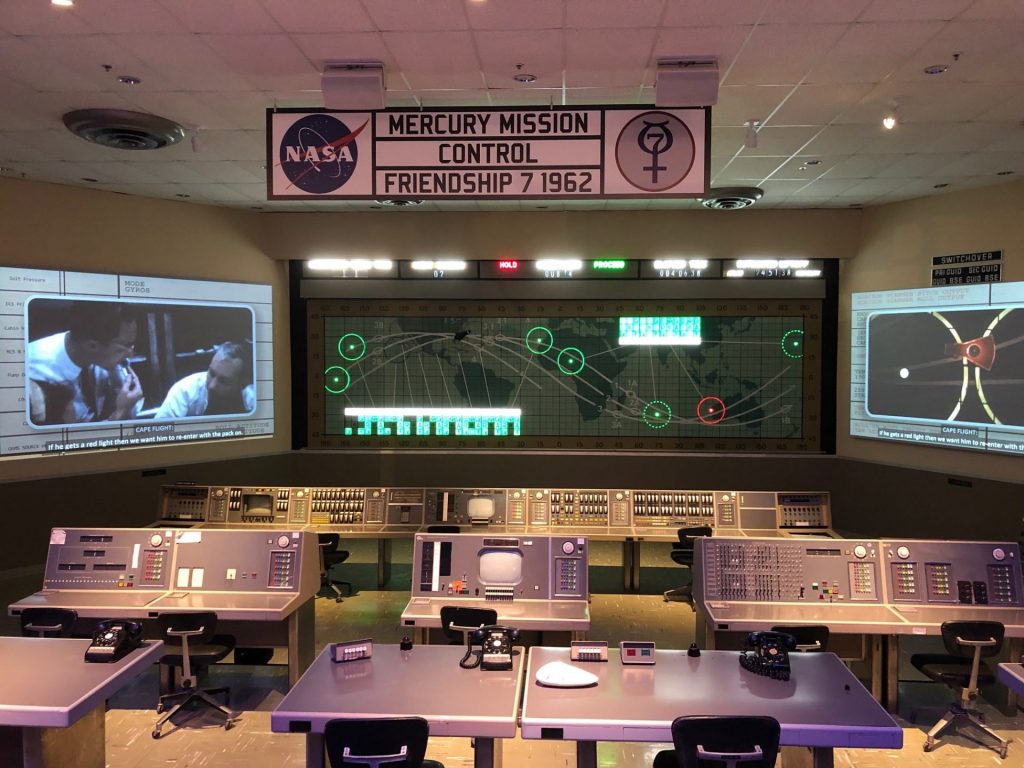 Apollo 8 and the Firing Room

Whether you’re reliving the moment, or watching it for the first time, experiencing the historical launch of the first crewed NASA mission to orbit the moon in a recreated Mission Control Room is sure to give you the chills and thrills felt by those who were actually present at Mission Control in 1968. This experience is sure to get everyone excited to see upcoming launches, whether you get to watch in person or through a live broadcast. 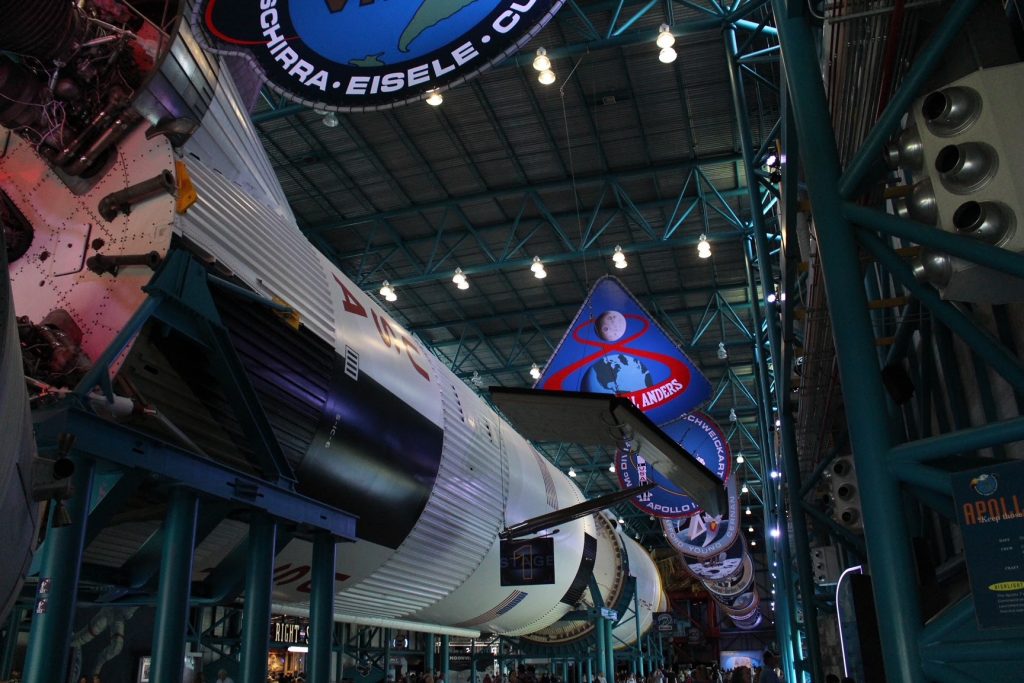 Watching the historic launches of the Apollo missions on TV, or even if you were lucky enough to see one in person from afar, cannot adequately convey the sheer magnitude of the Saturn V Rocket. But standing underneath it in the Apollo/Saturn V Center can. It is almost impossible to comprehend how such an enormity left the Earth’s surface, and you may find yourself with a sore neck from looking up in amazement for so long! The race to the moon and the Apollo missions encapsulate a unique time in our country’s history when dreams and possibilities suddenly seemed limitless, and the Apollo/Saturn V Center celebrates that moment in time in a way no other place on Earth can. Access to the Apollo/Saturn V Center is provided by bus and requires reservations upon arrival. 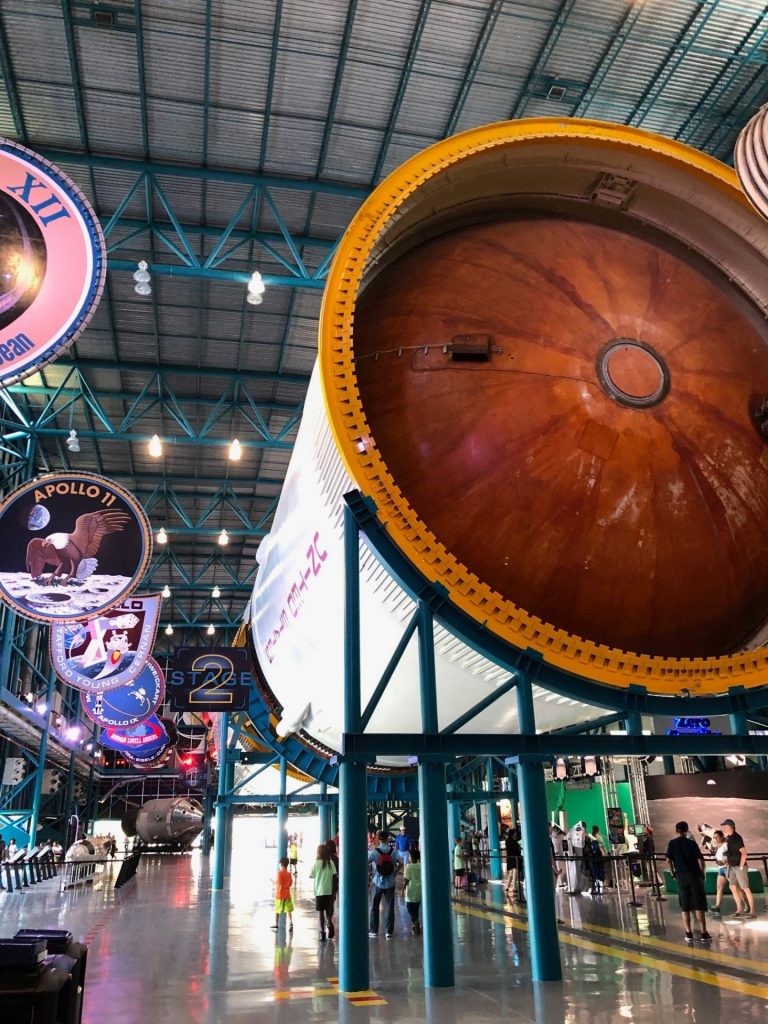 Get as up close and personal with a real lunar module as possible by visiting this exhibit depicting Neil Armstrong and Buzz Aldrin planting the first American flag on the surface of the moon. The lunar module on exhibition is the LM-9, built for use on the Apollo 15 mission, but never used due to the need for an expanded Lunar Module which could hold a lunar rover. Compared to the gigantic Saturn V, the Lunar Module is a tiny marvel that got humans down to the surface of the moon and back to the orbiting spaceship once lunar exploration was complete. Access to the Apollo/Saturn V Center is provided by bus and requires reservations upon arrival. 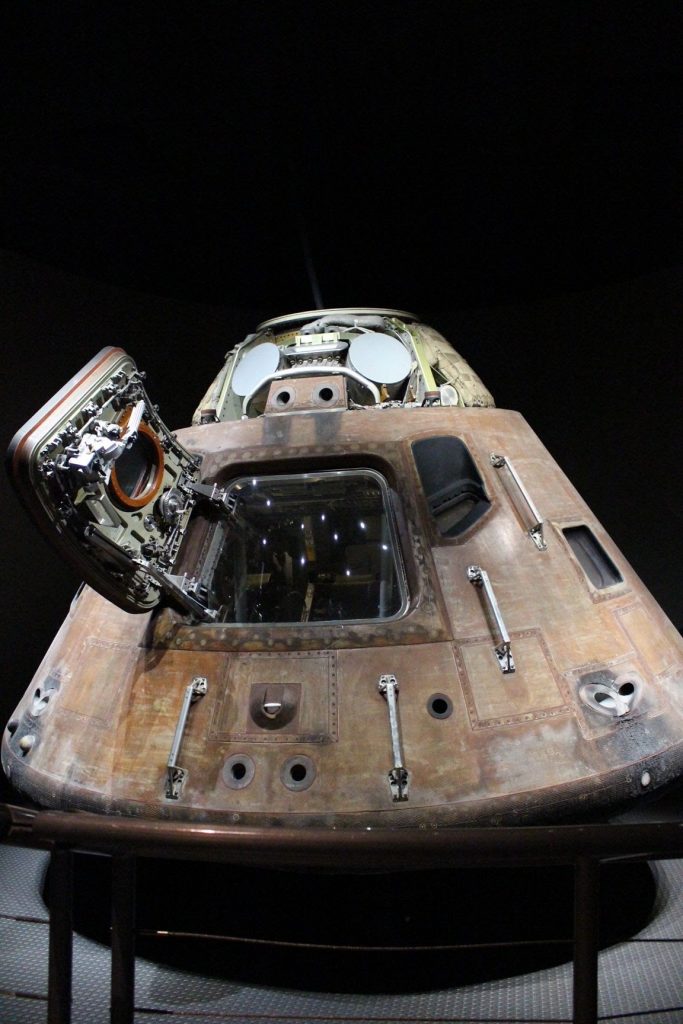 A must for history buffs and anyone who delights in seeing actual artifacts from historical events, the Apollo Treasuries Gallery holds authentically used capsules, an extensive collection of space suits (some with moon dust still on them!), and other unique space treasures. Access to the Apollo/Saturn V Center is provided by bus and requires reservations upon arrival. 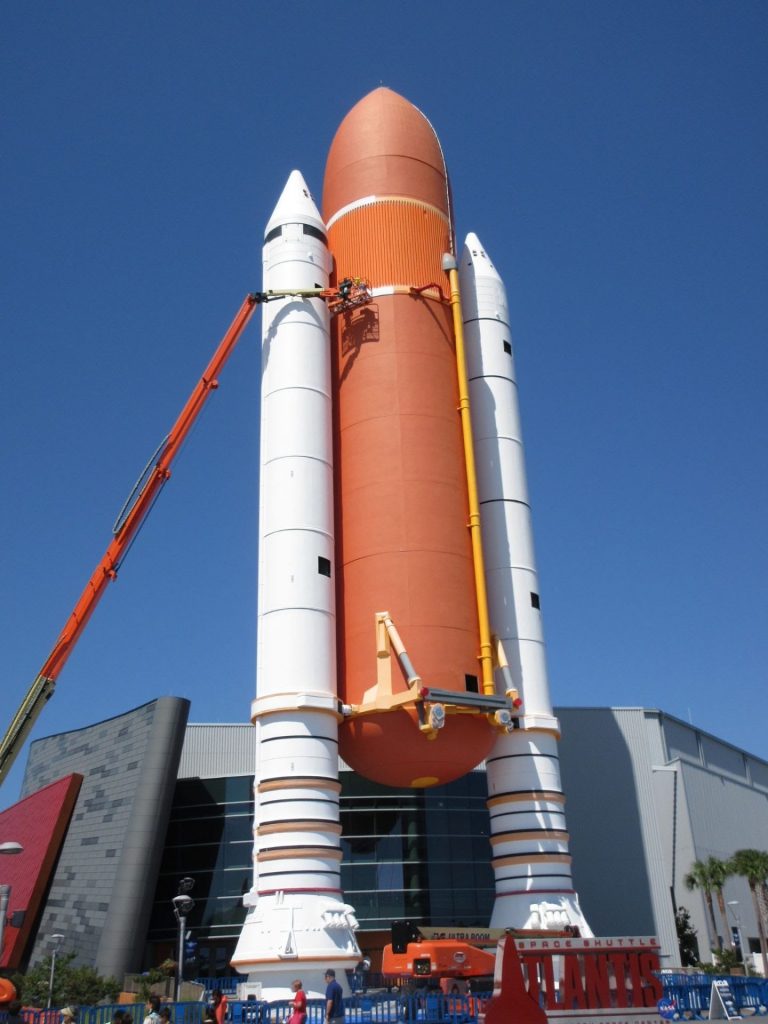 Get up close to the Space Shuttle Atlantis, the Hubble Telescope, and the International Space Station with interactive exhibits, flight simulators, and thrilling rides as you discover how Space exploration progressed throughout the decades after the original Mercury, Gemini, and Apollo Missions. 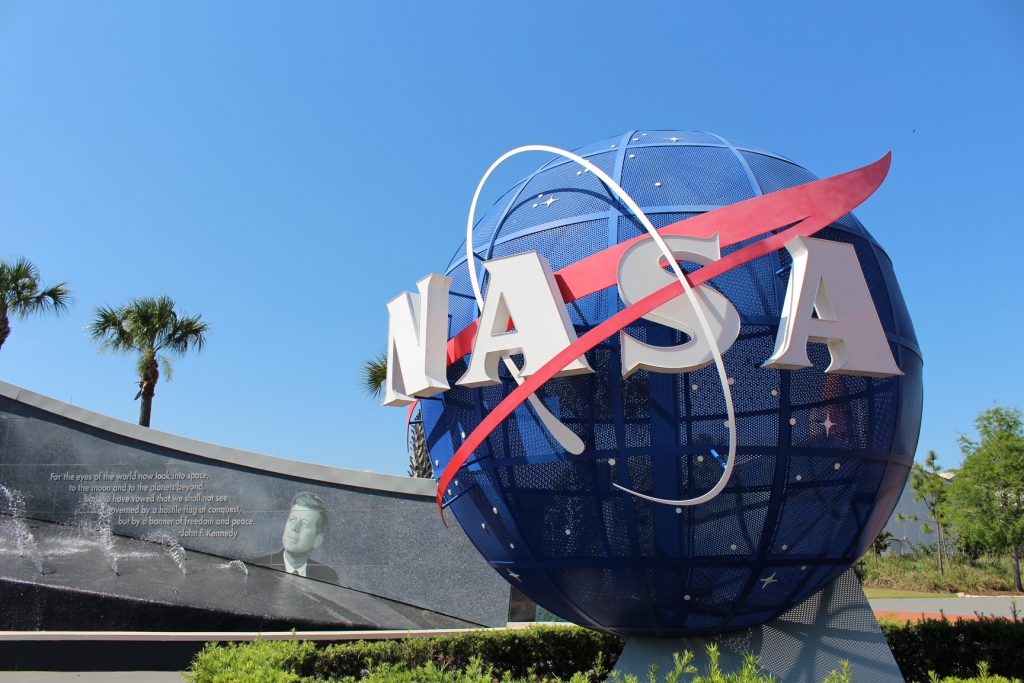 Preparing for Your Visit

The best way to prepare for a visit to the Kennedy Space Center is to get excited!

During the Space Race of the 60’s the whole world was watching, from every rocket launch to every capsule splashdown, millions of viewers were glued to their televisions unlike ever before. Today, there are countless movies and documentaries available to launch you into your own space exploration journey.

Like with space, the possibilities are endless, of course, but here are a few great options to get you started:

Since they began, our journeys to space have challenged and stretched the human mind, exponentially expanded the realm of possibility available to us, and dared us to dream bigger than we ever imagined. The next great discovery and adventure the universe has to offer may be within our reach, maybe during our lifetimes, maybe even during the next launch.

Visiting the Kennedy Space Center Visitor Complex offers the opportunity to learn about history, and maybe even be part of it too.

Contact your Love of the Magic Vacations travel agent to plan your visit today!

Pin this for your next visit. 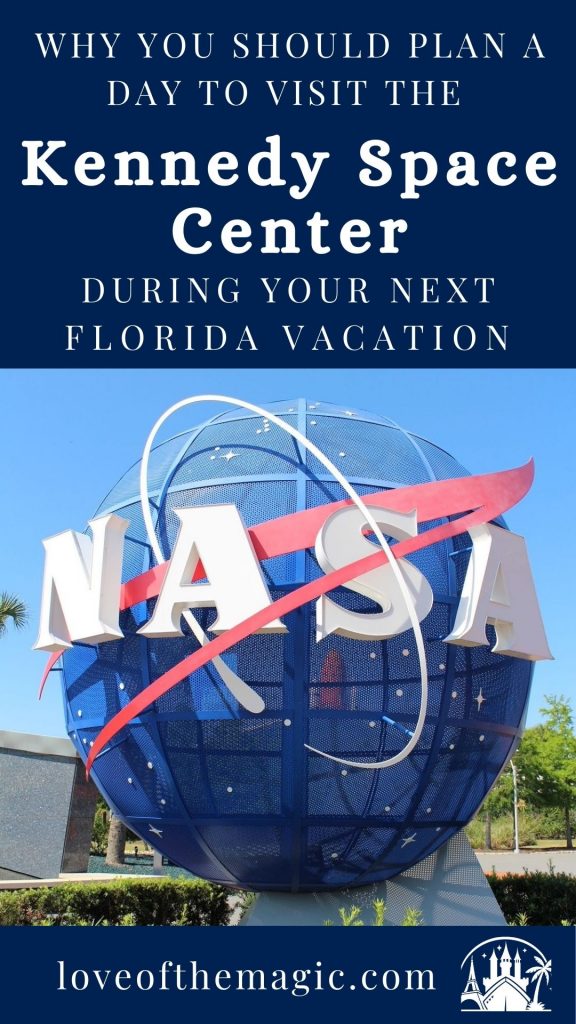 Why you should definitely stay in a premier resort next time you visit Universal Orlando!